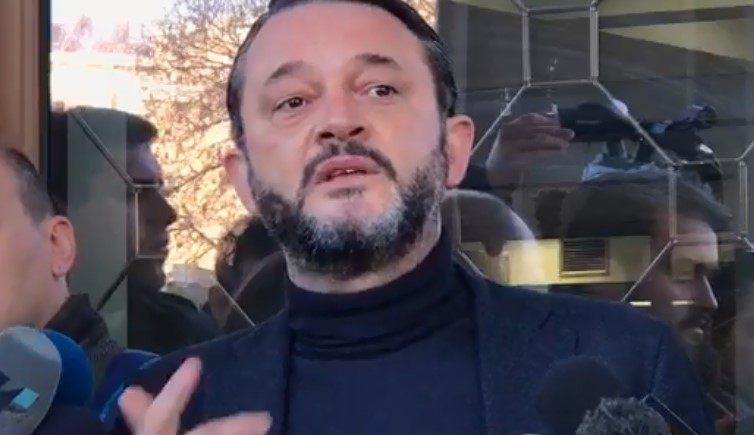 I did a great service to my country today, and I hope it will help to put an end to his despicable criminal group, said businessman Jordan Orce Kamcev following his highly anticipated testimony today in the major Racket scandal.

Kamcev spoke in detail about how disgraced Special Prosecutor Katica Janeva and her associate Bojan Jovanovski Boki – 13 extorted money from him.

Don’t think I will just stand here and allow someone to push me down. I think that, with what I did today, I performed a great great service to my country, so that once and for all we can remove this evil that exists in our system… I employ 3.000 people, I’m the biggest taxpayer in this country and I will not allow my name and the name of my children to be tarnished by freaks such as Boki 13 and Katica Janeva, Kamcev said.

One notable point in Kamcev’s testimony was his insistence that politicians, such as his friend Radmila Sekerinska, and the outgoing Prime Minister Zoran Zaev, were not directly involved in the extortion. Kamcev said that Sekerinska’s name was abused by Boki 13, who carried his picture with the Defense Minister when he would extort money from businessmen. Zaev met with Kamcev, heard him out, was apparently shocked at the reports of racketeering, and told him to report the case to the state prosecutors some time in late March or early April, Kamcev added. Zaev continued to publicly push for Janeva’s appointment as a permanent Special Prosecutor until late June. As to the dilemma over whether Zaev informed the state prosecutors and asked them to investigate Janeva’s extortion attempt, of if he maybe warned Janeva and Boki 13, Kamcev said that he has no direct information. He revealed that at one point, after speaking with Zaev, he told the third co-defendant Zoran Mileski – Zoki Kiceec, that Zaev is now informed and that he is breaking contact with the extortion group.

In my case, in the “Empire” case, a case that was created in order to extort money, there was no direct involvement of politicians. If there was, I would’ve said so publicly. As we can see, in other cases, like in the International Association, there probably were some other people who were in the Government. In my case, I had no such direct pressure, Kamcev insisted.

The International Association scandal, in which Boki 13 extorted money from real-estate developers promising to put his links to the SDSM party to good use, snared the Deputy Parliament Speaker Frosina Remenski. She is the only top SDSM party official who is charged so far in the scandal, and is currently in house arrest. During the media reporting on this, separate corruption scandal, it was revealed that Marija Jankovska, an in law of Sekerinska, was prominent in the bogus charity that was set up by Boki 13.

Besides Zaev and Sekerinska, Kamcev also named Healthcare Minister Venko Filipce as a person present during one of his extortion meetings with Boki 13, but quickly added that Filipce worked in Kamcev’s Sistina clinic and that he considers Filipce as his friend.

Most importantly, Kamcev was asked where did the estimated 1.5 million EUR he gave to Boki 13, destined for Katica Janeva, ended up. He said he has no idea, but that the money were likely spread around – without speculating where.

I’m not protecting anybody and I will not try to protect anybody. I’m trying to fight for justice in this country. I have no idea where the money ended, it was with Boki, that’s certain. Then, how was it divided, where, with whom, who took the money, I don’t know the answer to that, Kamcev said, before denying media reports that the Louis Vuitton bag full with money he gave to Boki was equipped with a GPS tracker, which allegedly showed the final destination of the loot. It was widely reported that the money ended up with Government officials, if not taken to the Government building directly.

The inclusion of SDSM party officials in the scandal was noted by Boki 13, and it has the potential to cause a rift in the ruling party. Boki 13 asked Kamcev if it’s true that Natasa Savova, former close associate to former party leader Branko Crvenkovski, helped Kamcev bring the recordings he made of the extortion attempts outside of the country and have them published. Kamcev denied her involvement, but it raised the prospect of renewing the confrontation between the old guard Crvenkovski affiliated wing of the party and the factions of Zaev and Sekerinska who currently lead the party.

In his testimony Kamcev also hit close to Zaev from another angle. He accused one of Janeva’s top deputy prosecutors, Lile Stefanova, of an additional extortion attempt against him, claiming she demanded that Kamcev gives her a store in one of his buildings, so that her daughter can open a dentist office. Stefanova, Kamcev said, sent this request to him through her close friend, major real-estate developer Vanco Cifliganec. Cifliganec today denied that he was the intermediary in this attempt. The Cifliganec family is very close with Zaev’s and his son Dusko is dating Zaev’s niece Eva Zaeva.