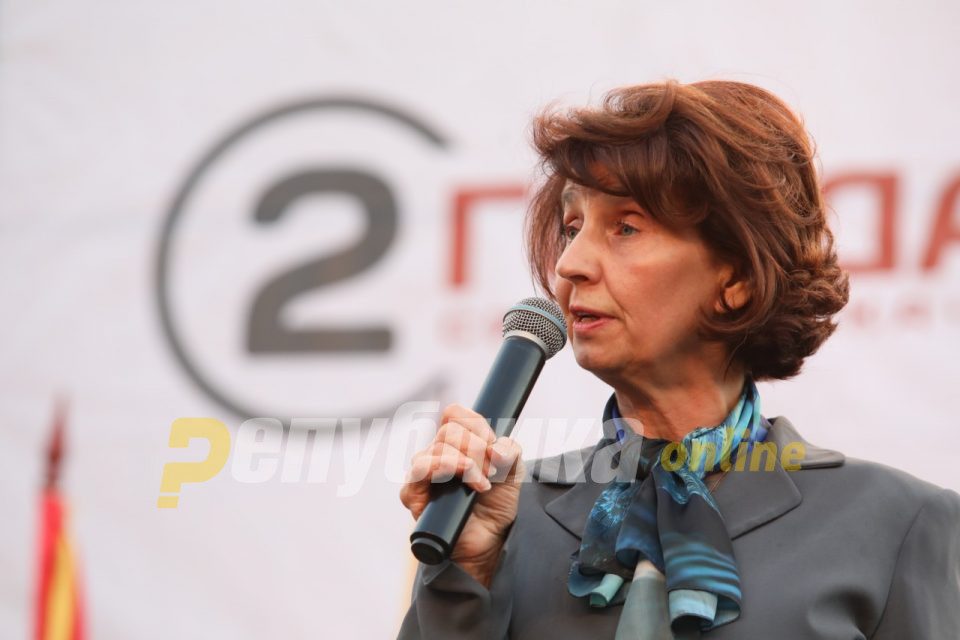 I expect the citizens to get out in great numbers on Sunday, expecting to continue what they did in the first round, to increase support for me. Why? Because the candidate of the government can do nothing but what this government did because he himself claims that he agrees 102% with the leader of SDSM.

Presidential candidate Gordana Siljanovska Davkova said Friday in her address to the public.

She added that she expects to gather around the membership of VMRO-DPMNE that supported the convention and all those who might not have been there in these two years.

So to return to the flock of those who propose reforms are of course the reforms to fight inside. Because it is obvious that if VMRO-DPMNE opened a door to me, it showed a democratic step forward.

I hope that the undecided voters and the disappointed from the catastrophic policies of SDSM in these two and a half years will join the members, sympathizers, those who want reforms. Why? Because we are we on the doorstep before announcing the decision that there will be no start of negotiations? Why? Because this government failed to fulfill a single Copenhagen criterion, because the government used it only for its own purposes from it a European politician’s profile and a European profile from these non-European politicians we cannot expect reforms.

I am convinced that the success on 5 May will open a gateway to another success, towards building a democratic, European Macedonia. Because it is obvious that reform changes can happen only if you reform yourself.

VMRO-DPMNE is doing it right now, it will be joined of course by new political forces in building a new parliamentary majority, and this government will be remembered only after the pain it has inflicted on us. Why? Because repeating the EU and NATO actually violated the law and justice, said Siljanovska Davkova.

Siljanovska: Macedonia has been and should be part of Europe!

Tony Blair took few days off when his fourth child was born, Zaev after the presidential election