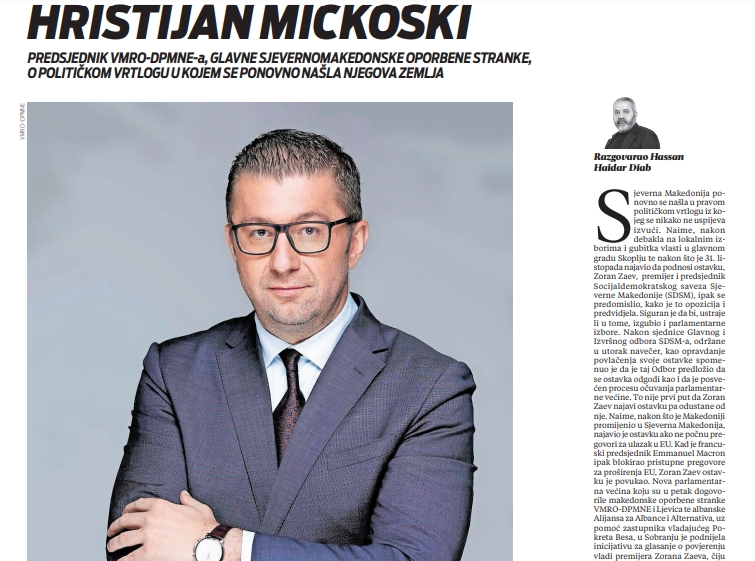 In an interview with the Croatian “Vecernji List” daily newspaper, conducted before the scandalous events in the Parliament on Thursday, VMRO-DPMNE President Hristijan Mickoski talks about the growing political crisis and the complete loss of legitimacy of the Zaev Government. Mickoski says that if the opposition is not able to form a new ruling majority, based on the outcome of the local elections, the only solution for political stability will be to hold early general elections.

Zoran Zaev’s resignation came after Danela Arsovska won the mayoral race in Skopje, but also after our victory in 42 municipalities, with large majorities over SDSM. With this, VMRO-DPMNE practically delegitimized the Zaev Government. His party lost in all major cities across the country. And Zoran Zaev made the elections all-in, he said that he will resign and leave politics if he loses the election, so the citizens took it as a referendum on his rule, and voted accordingly. Still, Zaev is known for not keeping his word and for two weeks he protracted his resignation. That is why the opposition launched a vote of no confidence supported by 61 members of Parliament, Mickoski told “Vecernji List”.

The opposition parties united for a clear purpose – to bring down this Government. It is true that there are differences among us, but they are lesser than the shared goal to conduct change and reforms. VMRO-DPMNE has no doubts about the strategic priorities of our country, the economic consolidation, EU membership, integration with the region. The Government should stop fearmongering and claiming that we will endanger the strategic priorities. They only do so to protect themselves from accountability for their crimes… If we are unable to form a stable Government that will conduct reforms, then snap general elections are the best option, Mickoski said.

Regarding the dispute with Bulgaria and the Prespa Treaty, Mickoski said that the party “has enormous objections on the treaty with Greece, and, from today’s perspective, the reality that Zoran Zaev brought with that treaty, did not translate into improvements in the country – the people still lead difficult lives, we have not moved an inch on the road to the EU, our healthcare is not free, our education did not modernize, there is no realistic fight against crime and corruption”.

The dispute with Bulgaria is newly created and is an exclusive consequence of the many promises Zaev made to Bulgaria, knowing that they are harmful and that he won’t be able to deliver. In this context, we have no right to be angry at Bulgaria, because it is natural that they will advance their interests. But what is really hurtful is that there are people in our country who are prepared to trade with anything and accept everything. When the Prime Minister makes promises to Bulgaria, it is not from the desire to protect national interests, but to protect his position in power for a few days more. He defrauds our neighbors, but most of all, he lies to our own people. We sat out red lines that are contained in the resolution that VMRO-DPMNE proposed and the Parliament adopted, Mickoski said.

When asked whether Macedonia can join the EU without the name change, which VMRO-DPMNE resisted, Mickoski told “Vecernji List” that Macedonia “can’t expect to join the EU with the current level of crime, or the bureaucratic procedures that block the system – I say, we need to do our homework and we will become a desirable EU partner”. 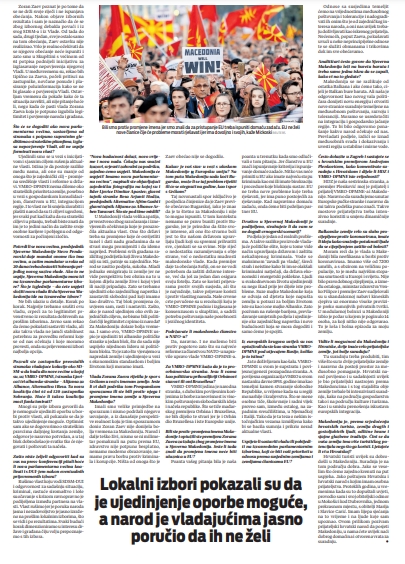