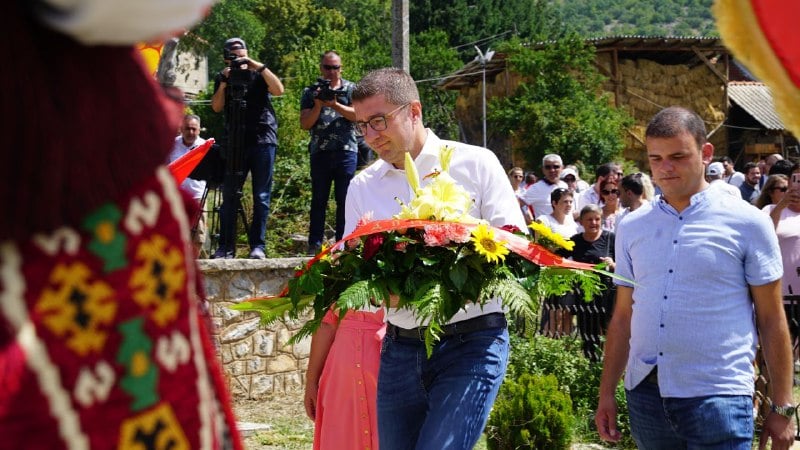 VMRO-DPMNE leader Hristijan Mickoski called on parties and stakeholders to unite against the government in a speech delivered in the Struga village of Tasmarunista to mark Republic Day – Ilinden.

He added that Ilinden belongs to everyone and that is why Macedonia must be a country for everyone.

And that is why we must succeed as a country and we must not be satisfied with average things, and in this difficult time the average looks good to us, because we are dealing with the worst, underlined the leader of VMRO-DPMNE.

He says, it is shameful that for the first time in thirty years of independence they changed the celebration for Ilinden.

There is no speech at Meckin Kamen, first because they have nothing to say, and then because they are afraid of the people who will tell them what they think about their rule. Stevo Pendarovski cannot be the point of unification, he is the point of division because the man took a side and decided to be silent when he should have been loud. When there were election frauds, when he had to oppose the bad laws, when Zaev negotiated changes at the expense of the identity, said Mickoski.

It is clear that VMRO-DPMNE has the support of the people and we are on the verge of victory, he added and warned that the opponent on the other side is dishonest.

I say this very carefully and very consciously. That is why the difference in the elections must be larger, and for that to happen, a great unification and people that will go to the polls is needed. The thing is not to make a coalition for power, but coalition of the people against Zaev. From here, the point of our unification is to resist the government and to raise the ruined state on its feet. But that requires conscious people, and politicians who will look beyond their appetites and interests in the long run. Therefore, uniting in one bloc against this government will be a fierce slap in the face for the government that will fall in a few months immediately after the local elections. And only then can we put an end to crime, and secure future for all, stressed Mickoski.