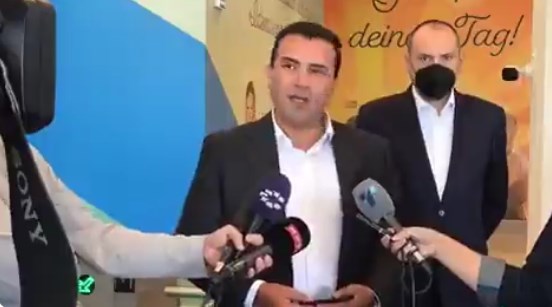 In his attempts to gain Bulgarian approval for the opening of EU accession talks, Zoran Zaev today also agreed to pay blame on Macedonians for the period of World War Two occupation, while exculpating the Bulgarian state.

Zaev initially agreed to rewrite history books in a way that removes any mention of the Fascist elements of the wartime Bulgarian state – the term “Bulgarian Fascist occupier is common in Macedonian history books. The new version, preferred by Bulgaria, would just name the “Fascist occupier”, avoiding where possible the mention of the country that occupied Macedonian in World War Two.

And today, when asked about this proposal, Zaev expanded further, by trying to blame Macedonian “collaborators” – and mangling the pronunciation of the word in the process.

In the process of Europeanization of our country, it is not acceptable to give Fascism an ethnic designation. In European countries, Fascism doesn’t have an ethnic designation. We also had Nazi collaborators here in Macedonia in that period. You can’t say that we were all with the partisans and that another nation was all Fascist, because there were other collaborators of the Fascists, Zaev said.

Macedonia was under Bulgarian military occupation during the war, and did not have a separate, local administration. The biggest attrocity of the occupation is the deportation of over 7,000 Jews from Macedonia to the German death camps,  and Bulgarian authorities have tried to avoid blame for it.