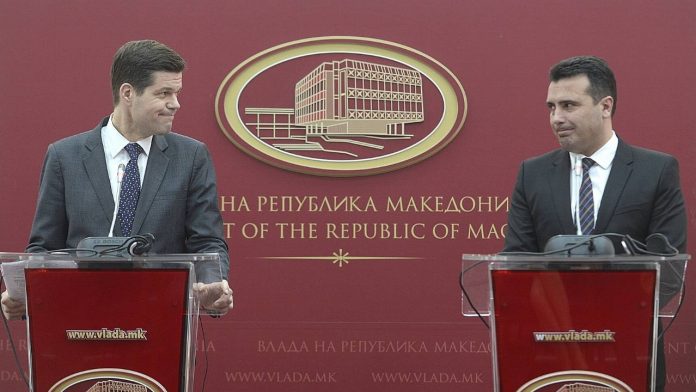 During their hour long conversation with Zoran Zaev, Russian pranksters Vovan and Lexus attempt to get him to commit to illegal acts and violations of democratic rules.

Zaev accepted the advice from one of the Russian comedians, pretending to be Ukrainian President Petro Porosenko, to give a bribe of 100.000 EUR to the Ecumenical Patriarch Bartholomew in exchange for his recognition of the Macedonian Orthodox Church.

The pranksters go a step forward and advise Zaev to rig the 2018 referendum on the renaming of Macedonia, a bit of advice he accepts. Zaev is recorded telling “Petro Porosenko” that he was able to get a long list of Western politicians to visit Macedonia and to support the referendum.

– Wess Mitchell is always in our connection we have even mobile phone communication especially for that. They are very aware what happen here in the country because it is a very sensitive period of time for us. September is a very important month and I think we will prevail and we will succeed, Zaev tells “Porosenko”, and in exchange receives the following bit of advice:

– Yes I agree, we will also be part of that family I think, soon. It’s really important for us to have such friend as Macedonia. Mr. Stoltenberg also promised fast consideration for us, but we will have to hold referendum to join NATO. This was criticized much in our country, but how one of our politicians says, it is not important how people vote, but how you count votes, ha ha.

– I hope that this advice will help you too

The September referendum ultimately failed due to low turnout (just over 36 percent, with 50 percent required to make the referendum valid), and it included serious irregularities, especially in the ethnic Albanian parts of Macedonia, where impossible numbers of voters were registered as voting in the last few hours, indicating that ballot stuffing was needed to even get to the 36 percent turnout. But Zaev used the judiciary to pressure a number of members of Parliament to vote in favor of the name change anyway.

During the conversation the pranksters also ask Zaev to give them the numbers of several leaders, like Kosovan Prime Minister Ramush Haradinaj and the aforementioned Wess Mitchell, who is a particular target for Russia. Zaev happily agrees, and gives “Porosenko” Mitchell’s number, which is obscured in the audio recording. Zaev tells “Porosenko” to use WhatsApp for further communication.