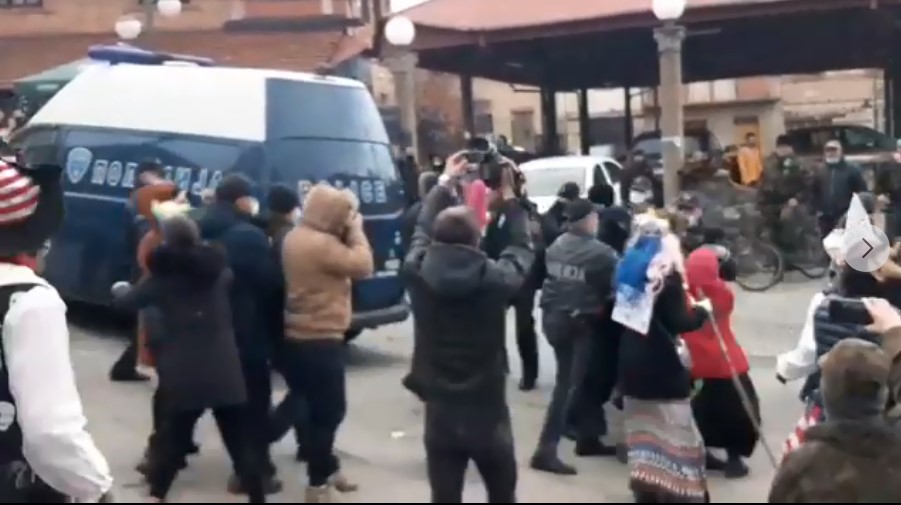 Interior Minister Oliver Spasovski dismissed the riot police raid on the village of Vevcani on Wednesday as “nothing spectacular”. The police disrupted the large procession of villagers who were donning masks in the ancient tradition of the region, ostensibly for coronavirus violations. Spasovski blamed the citizens of Vevcani of using the raid for political purposes.

We must act wherever there is need to act, especially now in the pandemic, and we must check if the measures to prevent the spread of the virus are being respected. Nothing spectacular happened in Vevcani – they did not honor the deal we had. They wanted an incident and a spectacle for political reasons, Spasovski alleged.

The police descended on the village in full force, even though the carnival takes place in the open and the people are wearing masks by default – which is the whole purpose of the carnival. The on-lookers were also largely wearing masks.

The Vevcani carnival dates to pre-Christian times and is held on the feast of St. Basil, which is the start of the New Year under the Julian calendar. It also has a strong political connotation – besides pagan style masks of ghosts and spirits, the villagers also prepare elaborate masks of current political events and mock abuses of power, nationalist pressures from neighboring countries, religions.. It’s possible that the intervention was provoked by the fear of the Government that neighboring Bulgaria and Greece, which are tightening the screws on Macedonia, will be mocked during the carnival. Bulgaria issued a formal protest after a Bulgarian flag was burnt by a group of masked carnival goers.

The free spirit of the village and its eagerness to stand up to authority is legendary – Vevcani declared mock independence from Macedonia and Yugoslavia after a brutal raid by the Communist police in 1987 in a dispute over water rights.