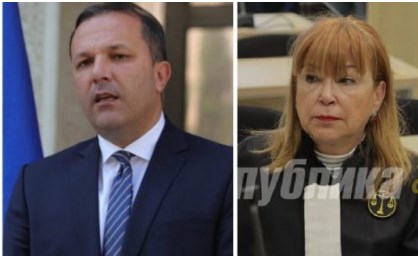 An in interview this morning, Interior Minister Oliver Spasovski insisted that he was conducting a clandestine investigation into a group of Ministry officials who were selling passports to regional crime bosses. Spasovski began making this claim after the opposition VMRO-DPMNE party revealed that the Ministry was issuing passports to top mobsters who used them to travel across Europe, conduct their criminal business, and even assassinations.

Trying to put a spin on the growing scandal, Spasovski insisted that VMRO obstructed and not spurred his investigation into the scandal, and even claimed that opposition leader Hristijan Mickoski was in contact with one of the nine Ministry officials who have been detained.

The leaders of an opposition party is protecting major criminals but now claims that he is fighting crime. On one hand he says that he is stimulating the fight against crime and on the other he is protecting “big fish”, as they say, Spasovski insisted in his defense.

Asked whether it is normal that such an alleged investigation takes place for two years, during which regional mobsters continued to receive Macedonian passports, Spasovski shifted the blame to the Prosecutor’s Office for organized crime which, he said, refused to work on the case. After that the case was given to general matters prosecutors.

This statement collides with the comment made by the head of the organized crime unit, prosecutor Vilma Ruskoska. She said that she is waiting on the Interior Ministry to investigate the case, and if they don’t, she will begin an investigation of her own.