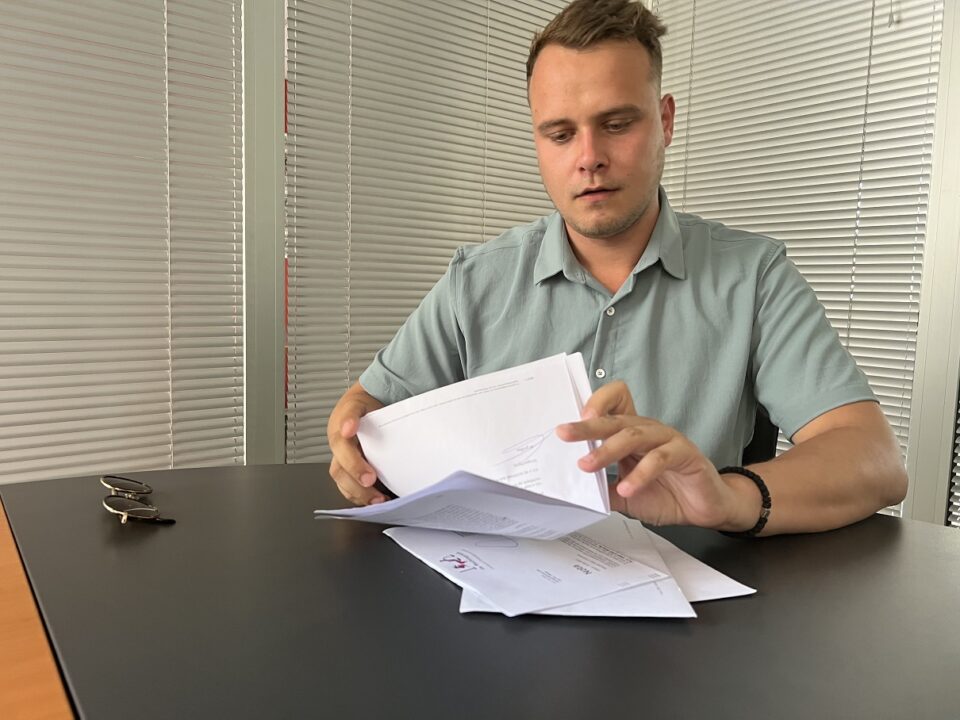 The struggle of Henry de Graaf, born Dimitrov, in the Kingdom of the Netherlands, with the Macedonian institutions and administration has been going on for three years. The nebula and illogicality that each of us has faced at least once in the corridors and at the counters, do not sway the 26-year-old to continue to seek his birthright – Macedonian citizenship.

I am privileged to have been born and raised in the Netherlands, in my opinion one of the most developed democracies in the world and there are really many things that Macedonians can learn from the Dutch when it comes to governing a country, he says.

After a long procedure, he finally has a verdict from the High Administrative Court, in which it is confirmed that he presented sufficient evidence that he is a Macedonian citizen by origin, based on a different article from the Citizenship Law. 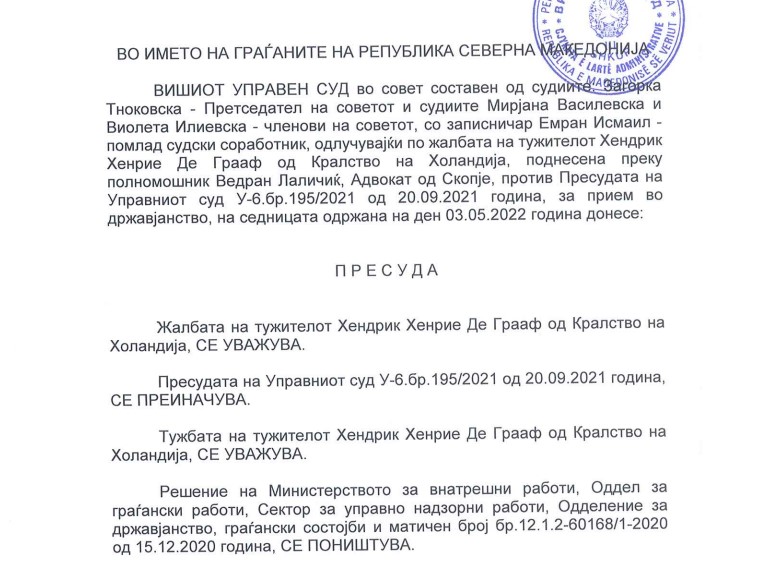 More precisely, according to Article 4, paragraph 1 point 3, which is an alternative legal basis, de Graaf is already a Macedonian citizen, because in the competent register in the Netherlands, he was registered only as the child of a Macedonian woman, while the data in the section about his father remained empty.

The court pointed out to the Ministry of the Interior that it should not reject De Graaf’s request by referring to Article 5, because another article applies to him, that is, it is impossible for both articles to apply to one person, because they are essentially different situations.

However, the Ministry of the Interior does not take into account the indications from the court, which annuls the decision of the Ministry according to which he has no basis to obtain Macedonian citizenship. The Ministry of Internal Affairs takes a new decision that again rejects his request, again referring to a different article and completely and shamelessly ignoring the Court. 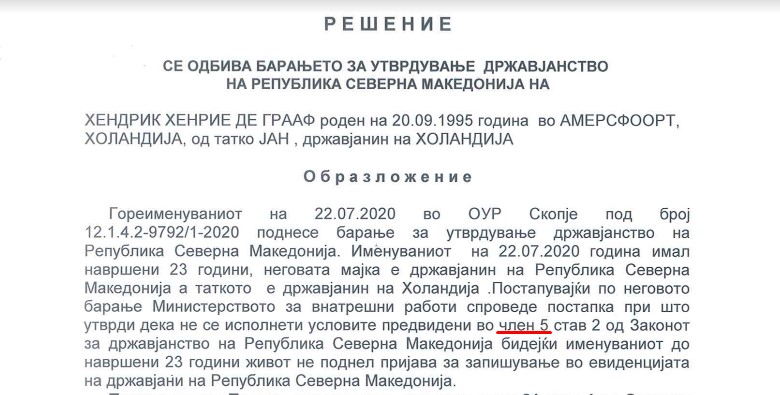 The young man seeks justice through the State Administrative Inspectorate, where he files a complaint, but that too does not bear fruit and once again, Henry will have to drag himself through the courtrooms to prove what he has already proven – that he is Macedonian by birth.

Looking at this situation from the perspective of a Dutchman, I am horrified by the administration in Macedonia, but also by the government. They keep repeating that they are working on the rule of law and that the standards are being adapted to those in the EU. They are not even close. Certainly not even close to the standards I enjoy in the Netherlands, says Henry among other things.

Where is the problem?

What is the next step and where is the problem in Henry’s case? While we wait for the answers from the Ministry of the Interior, let’s remind that one of the biggest scandals in the ministry under the leadership of Oliver Spasovski since its foundation is certainly the “Mafia” affair, when it was discovered that criminals from all over the world received Macedonian passports with a new identity – completely legally.

Who has a problem with a young man born to a mother from Vinica, who has the right to Macedonian citizenship and documents, but cannot use it? 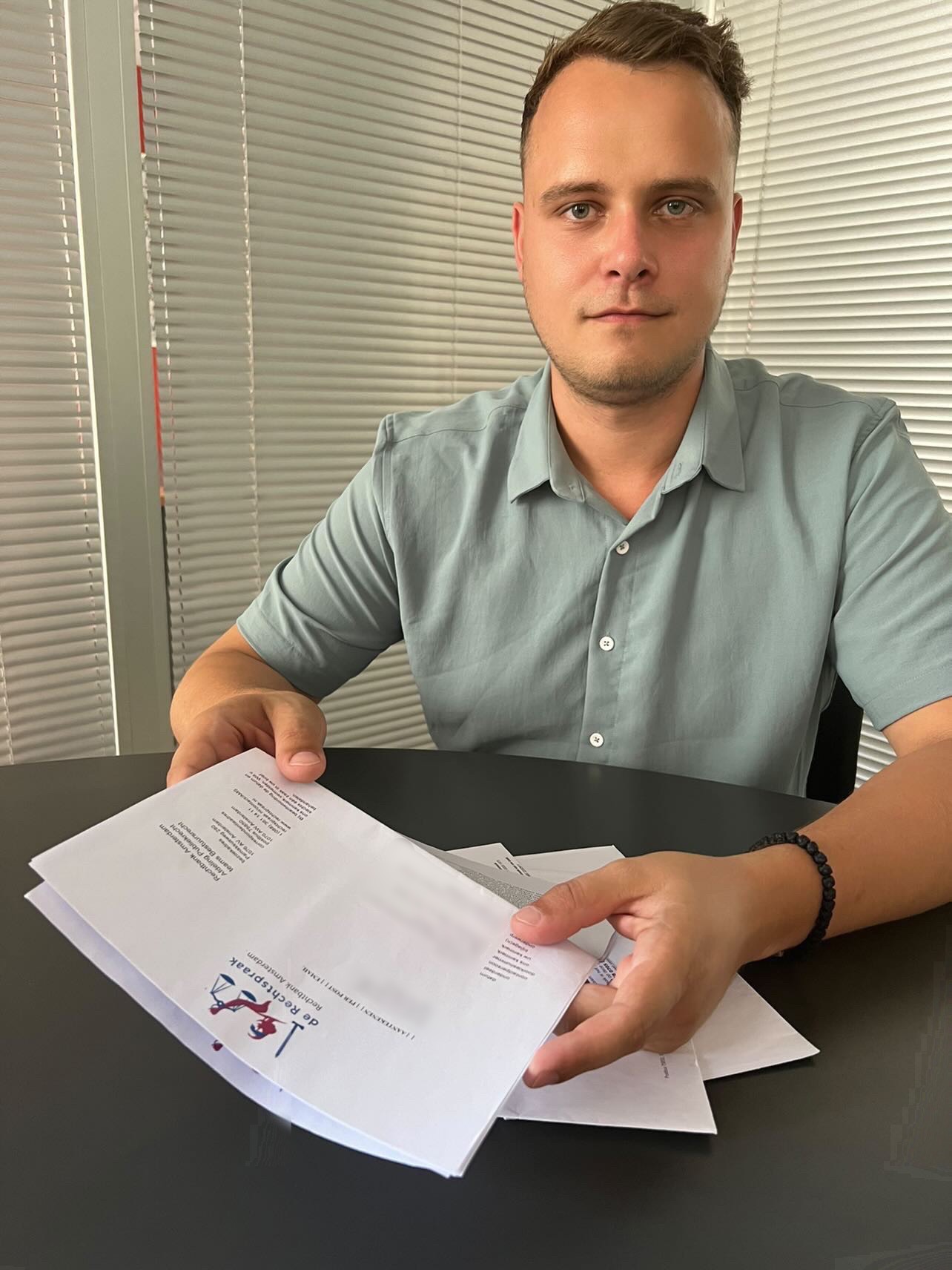 De Graaf suspects that maybe it is his work as a young lawyer and his interest in Macedonia and Macedonian issues, specifically – the Prespa Agreement.

As the Dutchman explains, he asked the Dutch Ministry of Foreign Affairs for all the information they have about the name change of Macedonia, including the events in the Macedonian Parliament during the implementation of the Prespa agreement, where the SDSM-led government, as he says, it has seriously violated the principles of separation of powers, which is something that is essential to protect in all modern democratic countries.

In accordance with the law, the Dutch MFA was obliged and asked the Macedonian authorities for an opinion on the publication of these documents, so Henry suspects that the problems surrounding his procedure may have been caused because they “put two and two together” about the person in question.

He says that he is also disappointed by the Dutch government, because they know very well about the overall bad situation that Macedonia is in in terms of political control over the public prosecutor and the judiciary, but more importantly, they must have been aware about what former Prime Minister Zoran Zaev did it to the Macedonian people and to their Constitution.

The Dutch government always says that it cares a lot about the rule of law and democracy around the world, but it’s interesting that in this case they decided to turn their heads the other way, and to make matters worse, they want to reward this anti-democratic and illegal behavior with EU membership, he says.

Apart from his assumptions that someone might be targeting him, Henry, like every citizen who has faced similar administrative obstacles, asks – why when all the arguments are on my side, I can’t get the job done in Macedonia?

Without a word, the government granted citizenship to a Ukrainian politician with Russian citizenship, for whom Ukraine issued a warrant, and US put under sanctions