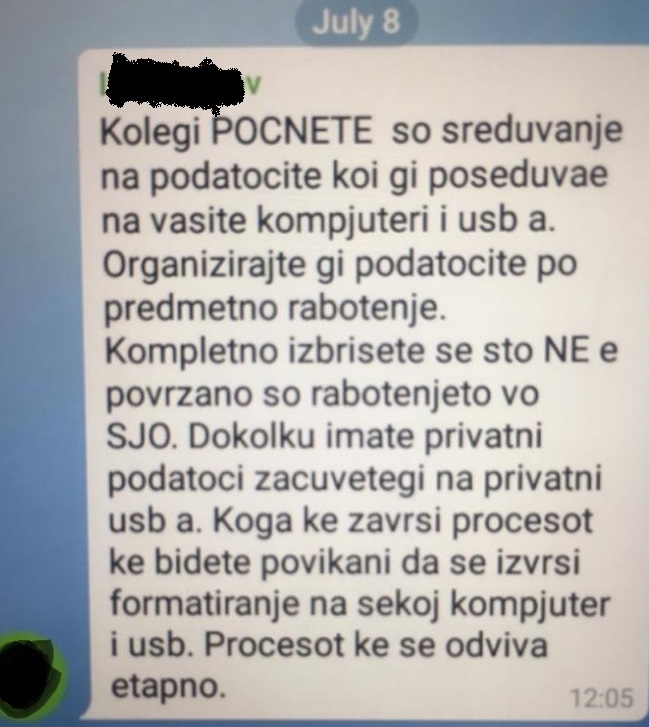 The formatting was conducted last week, after Janeva tendered her resignation following the arrest of her associate Bojan Jovanovski – Boki 13 on racketeering charges. Dismayed SPO employees raised alarm and the process that can lead to destruction of evidence was stopped, 360 Degrees reports. Most of the SPO employees turned their backs on Janeva the day after her resignation and they are now insisting that she’s solely to blame for the criminal abuse of the institution.

Their journalists have revealed a text message sent from the IT department of the office, to all employees, on July 8th, before Janeva’s resignation but when the scandal was already brewing in the public, which instructed them that to begin organizing their data and to delete everything that is not work related on their computers.

If you have some private data, store them on private USB drives. One this process is completed, you will be called up, and all computers and official USB drives will be formatted, the message informed the employees.

The SPO intiially denied that Janeva ordered the deletion of files and evidence, but the denial carefully avoided saying anything about the actual 360 Degrees report – that Janeva wanted a formatting that woud destroy logs of which prosecutor worked on which computer.
Janeva is still not charged for her role in the racketeering, but she had her phones seized, after initially claiming that she lost one of them, only to have it uncovered with an SPO employee who is dating her son Lazar Janev.

The opposition VMRO-DPMNE party called on state prosecutors to formally charge Janeva and request that she is detained, to stop her from destroying any more evidence in the alleged systematic abuse of office and extortion of money from businessmen who were charged by the SPO.