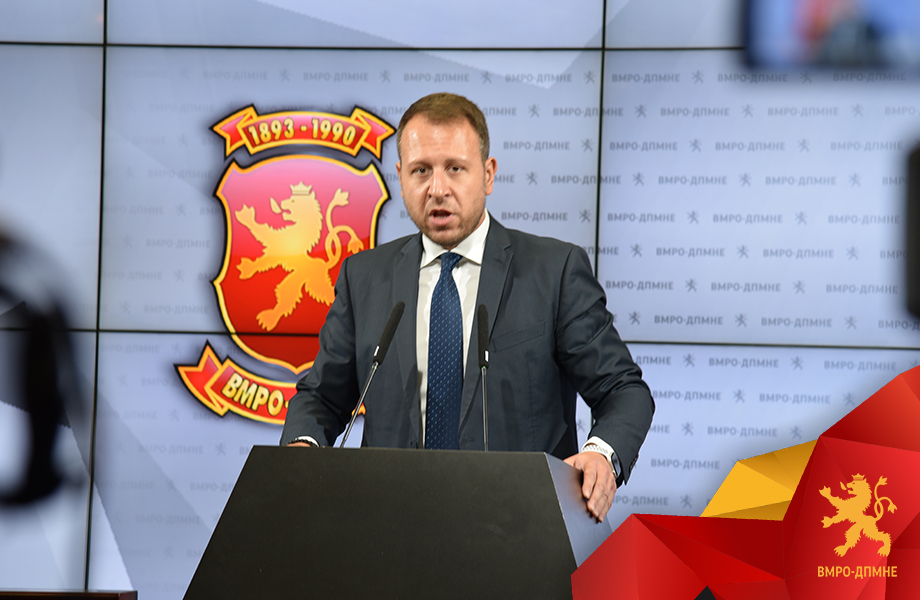 VMRO-DPMNE Secretary General Igor Janusev said that he wouldn’t be surprised if the opposition party and its leader Hristijan Mickoski face additional pressures and arrest attempts, after Mickoski revealed that he has the sworn testimonies given to state prosecutors over the major racketeering scandal.

Mickoski showed the papers to the press on Wednesday, but added that he will not publish them at this point, and will give a chance to the prosecutors to investigate the major scandal involving the Zaev Government. He only revealed that the testimonies contain names of Zaev Government officials. A number of pro-Government media outlets responded to the announcement by calling for an investigation into Mickoski and whoever gave him the testimonies from the OJO/PPO office of state prosecutors.

In the past years we’ve seen hundreds, maybe thousands of TV reports in which such testimonies were published, with unredacted names, and the issue of leaking was not raised. President Mickoski received the documents from whistleblowers. We have laws regulating this process. The people who decided to give them to us have determined that there is an on-going over up attempt in the judiciary and that the investigation is being conducted unlawfully. Like us, the whistleblowers are also committed to fight for justice and the rule of law, as well for faithful application of the laws and believed that justice will be perverted in this case, so they did what they did. But again, if the Government believes it was a crime, let them come and arrest us, Janusev said during a press conference today.

OJO prosecutors led by Zaev loyalists such as Vilma Ruskoska and Ljubomir Joveski have dragged their feet in the investigation of the major racketeering scandal, allowing Special Prosecutor Katica Janeva to cover up her trail for more than a month after the arrest of her associate Boki 13 before having her interrogated and detained. The prosecutors were also extremely reluctant to interrogate the officials from the ruling SDSM party who were also allegedly involved in the extortion attempts, and didn’t dare ask that any of them is detained.

Janusev said that he wouldn’t be surprised if the Zaev regime attempted to arrest Mickoski, especially following the statement from Zaev yesterday, when he clumsily claimed that Mickoski is involved in the racketeering. Zaev offered no evidence for his claim and later acknowledged that he said that because Mickoski frequently blames Zaev for the racketeering scandal, in which Zaev allies and associates such as Janeva and Boki 13 are suspected of extorting millions from businessmen.

It was a panicked, nebulous attempt by Zaev to divert the attention from himself. But, with this criminal Government, anything is possible, Janusev said.

Janusev: SDSM already controls the judiciary, what are they marching for?