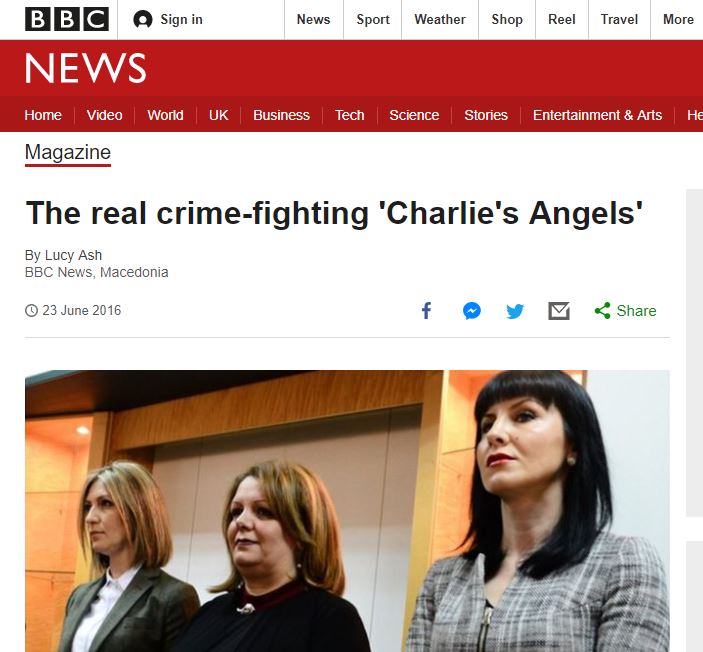 It’s safe to say that no Macedonian had so much invested in him or her, to build up her image at home and abroad, as Katica Janeva had. Despite her complete lack of prior achievement, less than mediocre academic record, and even her struggling to read from a pre-prepared script…

…Janeva was declared a heroic figure by bunches of non-critical journalists. Her secret ability was probably, as prosecutor Lile Stefanova, considered to be one of the brains behind the operation implied during a recent shocking press conference, was probably that she was prepared to sign documents no other prosecutor would’ve done. All of this is now boomeranging on Janeva, as her colleagues are publicly renouncing her.

The press which praised her to the sky, on the other hand, is curiously silent. It was a few short years ago when Financial Times reporter Andrew Byrne compared Katica Janeva to… wait for it… Beyonce.

Ms Janeva, constantly flanked by two female lieutenants — in a striking contrast to the male-dominated world of Macedonian politics — defies the President by launching several new probes”. Legal circles in Skopje initially viewed Janeva with scepticism, the unassuming small-town prosecutor, who chats happily about her love of music reality TV shows such as ‘The X Factor’. “But, many say they underestimated her ability to gain public support. Outside a Skopje café this week, two teenage girls rushed for an autograph. She’s like Beyoncé in this country”, the FT wrote. Mr. Byrne, who has since left journalism, hasn’t commented publicly on Janeva’s growing scandal.

– Three women have become the scourge of Macedonia’s political elite and heroines of the street protests now rocking the tiny Balkan nation – some call them the country’s Charlie’s Angels. She may now be one of the most famous women in the country but until last September, few had heard of Katica Janeva. As chief prosecutor in the small border town of Gevgelija, her work mainly consisted of pursuing petty thieves and people-smugglers. But now she has been thrust centre stage in this turbulent former Yugoslav republic. Her new job is to probe claims of wrongdoing and corruption raised by a huge wiretapping scandal. As for the accusations against her office, that it is being used to score political points, she says, “I do not pay attention to those remarks. I am doing my job”, the BBC breathlessly reported in 2016.

Ash also hasn’t updated her report to include Janeva’s spectacular fall from grace, nor can you find any mention of the scandal on the BBC website. 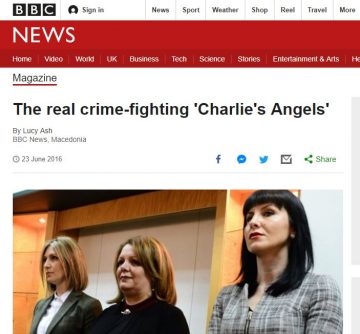 Lence Ristoska and Fatime Fetai were featured with Katica Janeva on shirts and protest signs, each of them standing in front of a letter from the abbreviation SPO (Special Prosecutor’s Office). On Tuesday, a day after the arrest of Janeva’s alleged criminal associate, the well known cross dressing showman Bojan Jovanovski – Boki 13, which prompted her resignation. Lence Ristoska led the press conference which amounted to nothing short of public defenstration of Janeva. Ristoska and the remaining SPO prosecutors piled all the blame on Janeva and pleaded that they are allowed to keep their offices and powers. Fetai was noticeably absent from the press conference – she had praised Katica Janeva to the skies only a few months before – on Boki 13’s 1TV television no less, and sticking a knife in her back so soon would probably have been too much for her. Fetai hasn’t come out in defense of Janeva either.

Many of Janeva’s other public supporters have since been ridiculed as opportunists, such as one Damian, quoted in the BBC report.

Some have called the trio Macedonia’s Charlie’s Angels after the tough but glamorous crime-fighting force in the US movie and TV series. You can find images of them on posters, walls, pavements and t-shirts with the letters CJO the initials of the Special Prosecutor’s Office in Macedonian. “They’re the first real glimmer of hope that justice can happen in this country,” says Damian, a young medical student wearing one of the now ubiquitous t-shirts. “Their message is that the law is the law and nobody can go above it and beyond it. Ristovska says she and her colleagues are grateful for the support of the demonstrators but feels uncomfortable when people ask the women to pose with them for selfies or to sign their t-shirts. “We are not rock stars. We are professionals and it’s a bit awkward,” she laughs. “It’s strange that we are treated as VIPs now.”, the BBC said.

Demijan Haxhi Angelkovski has since become a spokesman forZoran Zaev, his duties including passing the microphone at the Prime Minister’s praise filled events.

Truth be told, the BBC reporter did attempt to include some critical oversight of Janeva, which sounds prophetic given the recent events. After going to a long list of Janeva’s supporters, Ash also interviewed then Interior Ministry spokesman Ivo Kotevski, who warned that Janeva is “working outside the constitution and the law”, and pointed that her office hires SDSM party supporters as investigators and “experts”. But the report paints Kotevski as an angry Government official “scathing”, “fuming” and “jabbing his finger” and moves on from him to immediately compare Janeva to Giovanni Falcone and to present the Martin Neskovski murder case, an emotional incident which was apparently thoroughly manipulated by the SDSM party for political gain.

The Economist is the third British based media outlet which invested heavily in promoting the SPO and Katica Janeva, as well as SDSM led Colored Revolution on the whole. Its Balkans correspondent Tim Judah has also been quiet on the now growing Janeva scandal, despite the numerous spicy details it includes.

Of course, none of these can hold a candle to freelance journalist and USAID media project consultant Rachel Wright, which produced a 50 minutes long documentary on Katica Janeva and the SPO office for the benefit of the Serbian based N1 TV station. In the widely shared video, also named Charlie’s Angels, Katica Janeva was portrayed as a tough prosecutor fighting criminals and corruption, while her SPO colleagues are seen mocking defendants on the phone, and deciding who to arrest next over pizza and cigarettes. The same colleagues who now pretend not to know Janeva, and will likely approve her own arrest warrant in the near future.