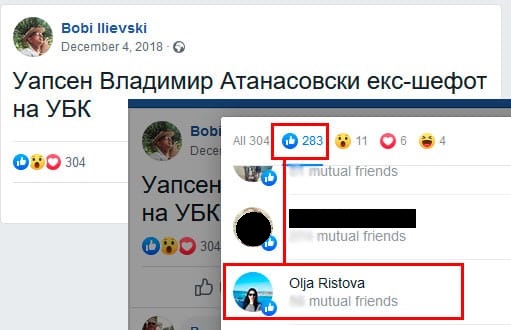 At the trial of Vladimir Atanasovski, the former director of the UBK intelligence agency, who is charged over the April 2017 incident in the Parliament, the defense had a novel piece of evidence showing bias on the part of the judge.

They presented a Facebook “like” from judge Olja Ristova, she gave to a report that Atanasovski was arrested. Ristova’s brother, an outspoken pro-Government journalist Bobi Ilievski, wrote that Atanasovski has been arrested, and shortly after Ristova “liked” the news, the defense said.

Ristova confirmed that she liked the Facebook status and said that she is surprised the defense would bring it up now. She denied that it is evidence of her bias against the defendant.

Police confirms identity of the body found in Nerezi, as fear and speculations spread in the capital