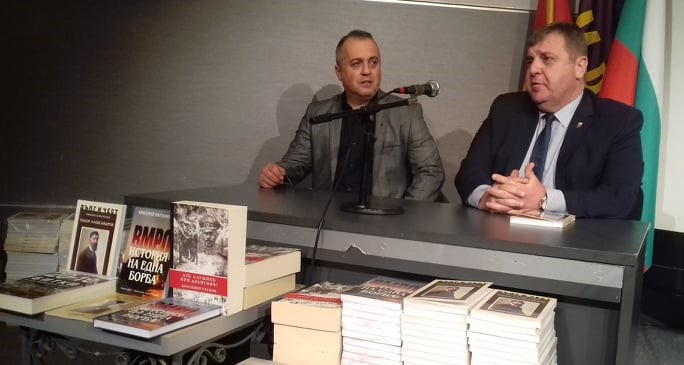 Bulgarian Defense Minister Krasimir Karakacanov, who leads the nationalist VMRO-BND party, was in Bitola today to present books about Todor Aleksandrov and other heroes of the VMRO movement. Karakacanov insisted that Goce Delcev was a Bulgarian and said that future Macedonian – Bulgarian relations will depend on the outcome of the April 12 elections and if Macedonia will continue the policy of accepting that its heroes are Bulgarians.

History is clear and who wants to read will understand. Look at the documents, Goce Delcev declared himself as a Bulgarian not just because he wanted a Bulgarian passport. That’s stupid. Nobody needed a Bulgarian passport to study in Bulgaria at the time. He came from Kukus to study in a Bulgarian military school. There is no need to keep arguing. Look at Austria and Germany, is there any dispute between them what language they use? Does it reduce Austrian sovereignty if they speak German?, Karakacanov said.

His comments about Macedonia’s future relations were an open endorsement of the SDSM party, which signed the 2017 treaty with Bulgaria and agreed to give up “ownership” of a number of historic figures, acknowledging their Bulgarian identity. Talks are currently blocked over Goce Delcev, who is seen as the most iconic figure of the Macedonian national liberation movement.

The people will decide, and if they choose wise and farsighted politicians, there will be a solution. But if they move against EU and NATO and start dividing the people instead of uniting them, then there is no future. It is up to the Macedonian politicians, if they ask for our help they will get it. But we can’t force love, Karakacanov said.

Karakacanov was confronted by angry people from Bitola. Artist Slavo Spirovski was removed from the event by Karakacanov supporters after telling Karakacanov that Goce Delcev fought for an independent Macedonia and not for Bulgaria. The local chapter of the association of WW2 partisans, which generally supports SDSM, issued a statement condemning Karakacanov and insisting that Bulgaria was a fascist power during the war.