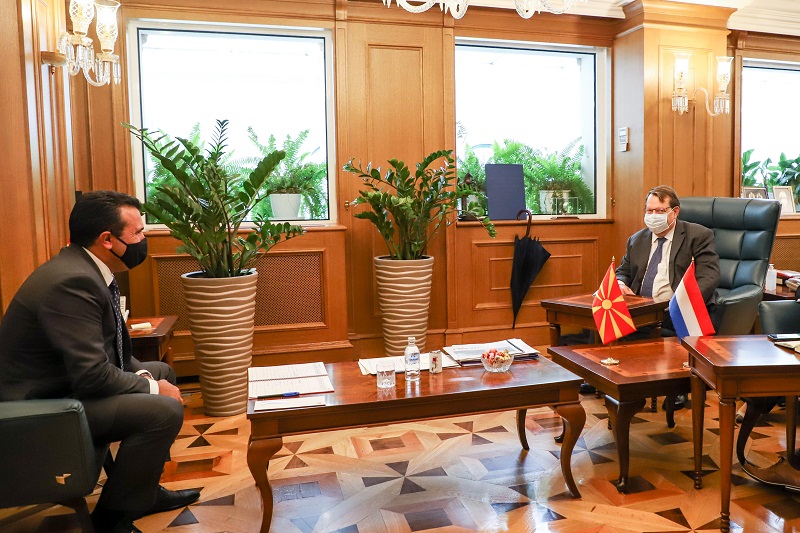 Macedonian Prime Minister, Zoran Zaev, met Thursday with the Ambassador of the Kingdom of the Netherlands to our country, Dirk Jan Kopp.

At the meeting they discussed the participation of the government delegation, led by Prime Minister Zaev at the EU-Western Balkans Summit in Slovenia held on Wednesday.

Prime Minister Zaev expressed satisfaction with the support expressed by EU leaders after the summit for Macedonia’s accession to the Union, adding that talks with Bulgaria resume and expressing confidence in overcoming the dispute in the coming period.

Ambassador Kopp congratulated Zaev on the successful census in our country, emphasizing that it is an important process for successful implementation of policies to improve the lives of citizens.

In that regard, it was assessed that the implementation of reforms, the rule of law provides functional institutions and the creation of a successful business climate, with the interlocutors agreeing that favorable conditions are created for further development, especially the capacity of the rule of law.

Prime Minister Zaev and Ambassador Kopp also discussed and exchanged views on the current political situation in the Republic of Macedonia and the upcoming local elections.

It was jointly concluded that the two countries have excellent economic relations and that favorable measures are taken in the country and opportunities are created to attract new investments and innovations, especially in the agricultural sector.