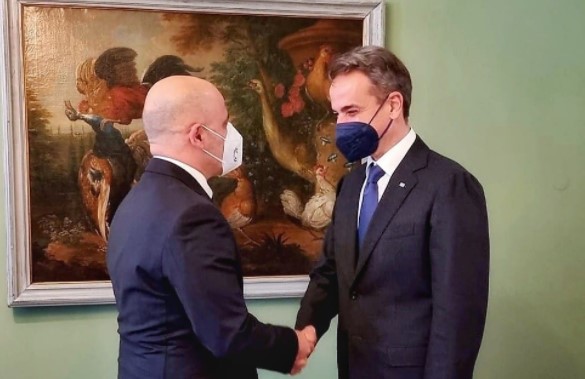 Prime Minister Dimitar Kovacevski and Greek counterpart Kyriakos Mitsotakis met at the sidelines of the Munich Security Conference on Friday and expressed satisfaction from the continued strengthening of the political dialogue in recent years, accompanied by high-level visits and meetings, building trust between the two countries and increasing economic cooperation.

The two prime ministers recognize the common interest in the progress of mutual relations in the joint strategic and capital energy investments, such as Macedonia’s participation in the LNG terminal in Alexandroupolis and the construction of a natural gas interconnector with Greece.

At the meeting, Prime Minister Kovacevski expressed satisfaction with bilateral relations and friendship between the two countries, which, as he said, has great potential for further promotion and expansion, in accordance with the strategic partnership established by the Prespa Agreement.

He thanked for the strong support of Greece for Macedonia regrarding the adoption of the negotiating framework for the formal start of accession negotiations with the EU, which was reaffirmed at this meeting.