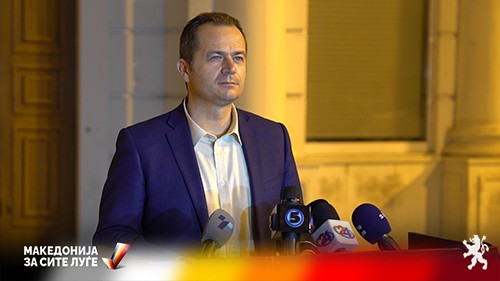 The Executive Committee of VMRO-DPMNE is meeting tonight to discuss the current socio-political situation, the latest political developments related to the state of the economy, the energy crisis and the government led by the outgoing Prime Minister Zoran Zaev. The Executive Committee believes that the current government has lost the credibility of the citizens, and the will of the people is clearly expressed in the last elections that SDSM lost by over 100,000 votes. VMRO-DPMNE won in 42 municipalities plus the city of Skopje, which is the historically best result of any opposition party in Macedonia. For us, it is a full responsibility to justify the expectations of the citizens and dedicated work of the mayors of VMRO-DPMNE who have already begun with the changes, Dragan Kovacki, member of the EC of VMRO-DPMNE told reporters.

He pointed out that the election results are a clear message that the people are demanding changes in the central government and that the people are dissatisfied with the severe economic crisis, rising inflation, as well as the continued failures and failure of the European integration plan.

This non-credible government was held only as a result of a kidnapped MP, which is another indicator of the hybrid regime of Zoran Zaev, against the will of the citizens. The deceptive policy of the outgoing Prime Minister is noticeable, who once said that he was resigning, then said that it was postponed indefinitely, and today the SDSM briefed that they were ready for a new government. With SDSM, there will be no new government, there can only be a deepening of the economic, energy and political crisis and the appointment of a new Zaev who will be a continuation of all his failed policies, said Kovacki.

VMRO-DPMNE therefore believes that snap elections would be the only solution to such a crisis, and everything else is deepening the crisis and entering into even greater uncertainty.

Kovacki: Certain structures influenced Rexhepi, and with such a “kidnapped” will there is no EU or European values

Kovacki: How will we explain to the citizens that the new printed money with changed name will help them in the fight against the virus

Kovacki: The government must not use the state of emergency for party purposes and employments