As announced in August after the publication of evidence related to the “Racket” case, which led to the fall of Zoran Zaev’s government, “La Verita” continued its investigative activity in search of new cases that could confirm the criminal management of power during the mandate of now already former prime minister.

The paper says that after months of working in which they have reviewed hundreds of documents, checked the authenticity of the facts and ensured maximum security of their sources, they can proceed to the publication of three articles and videos showing us of documents in the hands of the Macedonian prosecution allegedly incriminating Zoran Zaev for crimes of corruption and activities related to election fraud.

La Verita obtained evidence of such frauds when the Macedonian prosecution, following the official report, timely carried out special investigative measures, but without initiating proceedings against the suspects.

Even though the alleged crime we discovered known as criminal charge 50/16 at the Prosecutor’s Office for organized crime and corruption the prescription period has not yet elapsed, and soon everything should lead to further developments. In the coming days, in order not to invalidate the usability of the materials still available to the Prosecutor’s Office, we will just publish excerpts of part the documentation.

Data from the investigative measures of the crime according to relevant indications lead to Zoran Zaev, who according to a video recently published in Macedonia just at that time he boasted that he was elected by the European Union to lead the country in the future, this confirms our thesis stated in the past, undenied by neither the person concerned, that the Socialist leader had always known about the illegal activities of his associates. The fact that Macedonian prosecution has already opened a criminal investigation into Zaev in 2014, reinforces the responsibility of Federica Mogherini and the former EC president Juncker, for subsequently choosing Zaev as their trusted man.

Italian newspaper “La Verita” says it is strange that the prosecution failed to prosecute the case at the time, which, according to analysts, could mean that there was a parallel political agreement between the then government and the opposition – to keep silent over the case. 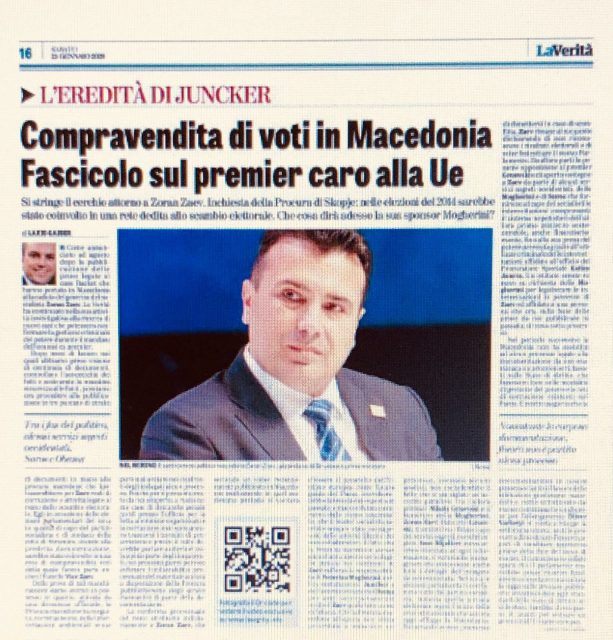 SDSM did not win the 2014 parliamentary elections, but in any case that election cycle marked the beginning of the institutional crisis that is still present in Macedonia today. Despite promises of a principled resignation in case of defeat, Zaev remained in his position, declaring that he did not recognize the election results and that he wanted to boycott the new parliament, writes La Verita

The Italian newspaper analyzes that then begins the heavy opposition against Prime Minister Gruevski and open support for Zaev from the Soros structures, which provided the SDSM president with wiretapped recordings.

Zaev also had financial support until he came to power thanks to the criminal use of the wiretaps handed over to Special Prosecutor Katica Janeva. The new institution was created from scratch at the request of Mogherini to legalize the illegal wiretaps in Zaev’s possession and entrusted to a person who is now on trial based on the evidence we published last summer. During the Zaev government period Macedonia did not witness any trial related to the evidence in the hands of the Special Prosecutor’s Office we examinated and there was no non-selective trial based on the rule of law that would shed light on how the government works and the criminal schemes that exist in the country. It is our hope that the documentation in our possession will reactivate the work of the Macedonian judicial and legal institutions, and as the new Hungarian Enlargement Commissioner Olivér Várhelyi underlined during his visit to Skopje last week, to help prosecutors prove that they are capable of changing their action before the end of March. The Commissioner hopes that by then the Macedonian Parliament will be able to finally draft a law on public prosecution bringing it closer to the standards of the rule of law in Western countries. That would be a real step forward for joining the European Union, one day, writes La Verita.