In today’s continuation of the electoral fraud affair, Italian La Verita journalist Laris Gaiser published a video of the investigation into the Macedonian justice system.

Existing documentation at the Skopje Prosecutor’s Office for Organized Crime possesses excerpts from recorded conversations reporting how Prime Minister Zoran Zaev, and his brother Vice Zaev, speaking openly on the phone, would have managed a network of electoral exchanges based on blackmailing and favors, targeting, especially the Roma population living in Strumica.

Analyzed documents describe a scenario in which the then SDSM leader and the mayor of Strumica, suspected of electoral fraud, used irregular means to be elected in Parliament and then become prime minister. Those who decided to collaborate were paid, for each single vote, between 10 and 25 euros, at two exchange office managed by colleagues of Vice Zaev. One of the two exchange offices, “Daskal”, was owned by Marjan Daskalovski, who was in 2014 also elected to the Parliament together with Zaev, and head at that time of the local section of SDSM. If money was not enough to convince the citizens, the delivery of building materials or the connection of houses to the public infrastructure were also promised. The man who allegedly manipulated with public services and controlled behavior of municipal employees, was the director of the PE Komunalec-Strumica, Zoran Georgiev. He would have been using the means at his disposal to threaten or punished those who hesitated to collaborate, and obviously reward others. In Macedonia, Georgiev is known for having been the head of all Zaev’s electoral campaigns and for being the husband of a Strumica-based court judge, Loreta Georgieva, who became part of the state Judicial Council, during the period of Zaev government, the institution tasked with controlling controls the work and results of all Macedonian judges, the Italian newspaper writes.

La Verita’s publication yesterday prompted an immediate reaction from ex-Prime Minister Zaev and the chief prosecutor for organized crime and corruption Vilma Ruskovska, who when asked by Macedonian media, made it clear that she had not prosecuted the case for lack of criminal evidence, but did not explain why the case was not closed immediately, journalist Gaiser commented on yesterday’s events here in Macedonia. 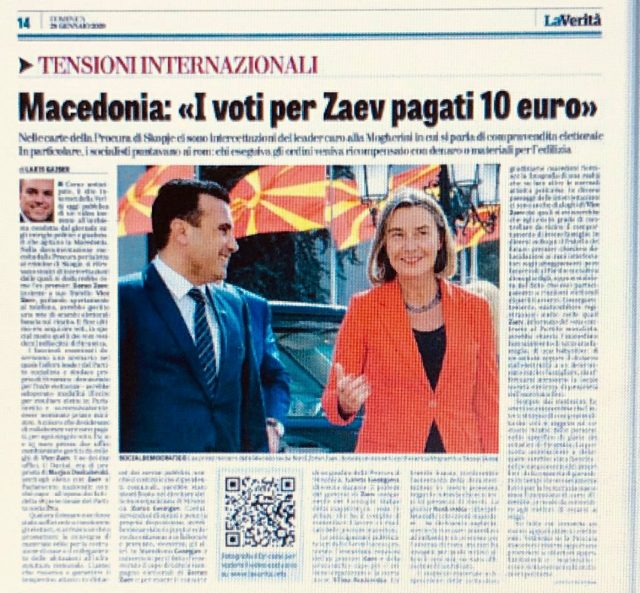 The explicit evidence in possession of the Macedonian prosecution depicts a picture of a reality that is beyond all normal and legal political standards.

Vice Zaev’s tapped conversations would prove that he was able to closely control the behavior of entire families. In several talks, the brother of the future prime minister asks his counterparts for clarifications on SDSM not favorable attitudes of wives and children, or he is angry about someone’s participation at electoral rallies of rival parties. Consequently, there are audio recordings in which Zaev, informed of the vote against SDSM, requires the immediate dismissal of an entire family, of a babysitter, of a driver, or the disconnection from electricity against a specific family unit through the local electricity company, owned by Austrian EVN.

As can be seen from the files, the entire voting system was based on constant blackmail of people, especially Roma people as part of Strumica’s population, according to La Verita.

The alleged criminal association would have been favored in achieving its goals by its ability to guarantee in an unusual short time for Macedonian bureaucracy the issue of identity cards in favor of people without it, in order for all of them to cast their could at the polling station.

In addition to this experience from the past, early elections will soon follow. We will see whether the Macedonian prosecution will continue with its investigations and how the state institutions will act.

First part: Zoran and Vice Zaev involved in electoral frauds in the 2014 elections