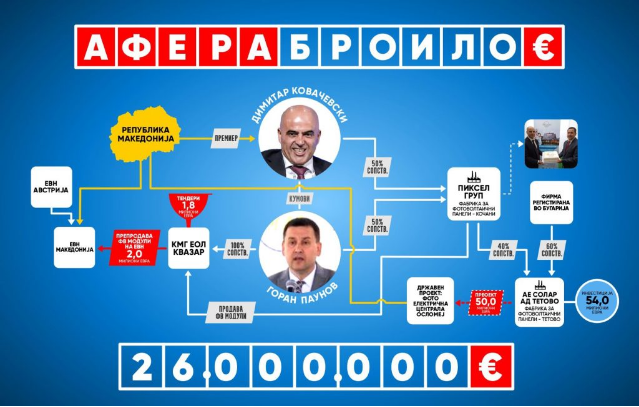 The affair involving Kovacevski takes dimensions of tens of millions of euros when the deserter Kovacevski takes the position of prime minister. Today we are publishing new details, which is the basis of the solar cartel created through exceptional trading with influence, abusing state positions and functions, the deputy from the ranks of VMRO-DPMNE, Mile Lefkov said at today’s press conference.

The suspicions are that Kovacevski and his close friend set up a private company for the production of photovoltaics to sell to the state-owned FEC Oslomej. That is, the friend and Kovacevski set up a company, and the state provides a million-dollar business.

Here are the steps they took.

8 months after Kovacevski sat in the prime minister’s chair, on 24/08/2022, the Pikcell group founded by him founded a company for the construction of a factory for photovoltaic panels in TIRZ Tetovo together with the Bulgarian company AE Solar Horizon from Sofia, under the name AE Solar AD Tetovo. AE Solar AD Tetovo, according to media reports, is an investment of 54 million euros. In it, the share of the company founded by Kovacevski is 40%, according to this, the part that it will invest in the factory is 21.6 million euros. Kovacevski’s friend Goranco Paunov, was appointed as an executive member of the board of directors, and Mirjana Paunova, his wife, was appointed as a non-executive member of the board of directors. Even the Bulgarian company partner of the solar cartel was formed after Kovacevski became the Prime Minister of Macedonia.

Namely, from the publicly available data, it can be seen that the partner company of Pikcell Group founded by Kovacevski, Solar Horizon AD Sofia, was set up on 24.03.2022, almost 4 months after Kovacevski was elected to the position of prime minister, and that is 15 thousand BGN founding capital.

Is the Bulgarian partner company founded practically only for the partnership with Pikcell Group founded by Kovacevski? And how much will this cost Macedonia?

As already briefed by the media, the government should also sign a contract for state aid with the company in which Pikcell Group, founded by Kovacevski, is a 40% owner.

Namely, if AE Solar AD Tetovo receives state aid, it will mean that Prime Minister Kovacevski is signing state aid for a company owned by a company founded by him and represented by his close friend. This is not the first time that the company founded by Kovacevski has received state aid. Pikcell Group has 8 payments from the state from 2019 to 2021, 8 payments from the state, and for half of that time, Kovacevski is the Deputy Minister of Finance. In these 8 payments, a total of 443 thousand euros were paid, and in the period from 2020 to 2021, payments were also made from the Innovation Fund worth 70 thousand euros, and that is also the time when Kovacevski is the Deputy Minister of Finance. In part of these payments, Kovacevski is already the mandate holder for the composition of the new Government. Kovacevski was caught alive at the center of the affair and a 26 million euro solar cartel. He no longer has the legitimacy to hold the office of prime minister and should resign immediately, Lefkov said.