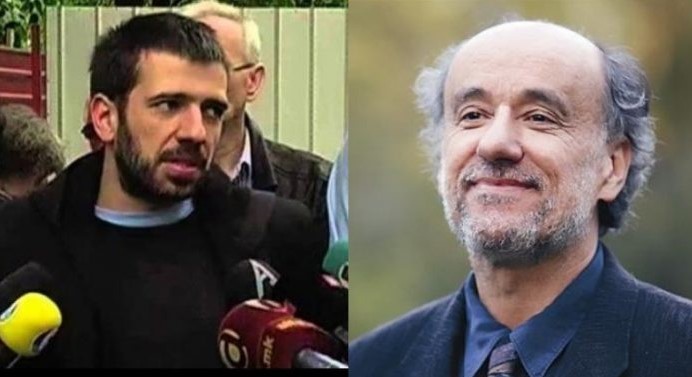 Goran Stefanovski is considered the leading Macedonian playwright of the modern era. Known for the cult classics Tattoed Souls, Wild Flesh, Black Hole and Hi-Fi, Stefanovski dealt with the anguish of his generation and portrayed the misery filled lives of the era of Communist decay. He died in 2018 in England, where he moved with his family to avoid the Yugoslav break-up. Even while abroad, he remained a sought-after voice in Macedonia and generations grew up with his Sesame-street style TV show Fuzzy Alphabeth.

And yet that legacy, coupled with the prestige of his brother, legendary guitarist Vlatko Stefanovski, is not enough to save Goran Stefanovski from being posthumously canceled on Twitter. The move came from Nikola Naumoski (@NikolaNaumeaux on Twitter), who is currently chief of staff of Skopje Mayor Petre Silegov. Naumoski, a close relative of outgoing SDSM Vice President Radmila Sekerinska, is a leftist activist known from the days of the Colored Revolution when he attened an improvised choir – “The Singing Skopians” – of like-minded activists who tried to go viral with songs criticizing the conservative VMRO-DPMNE led Government. He then led a group of self-styled “Park Defenders” who camped out on construction sites in a (failed) attempt to prevent the Skopje 2014 urban renewal project. Both projects are now largely defunct after Naumoski and other Singing Skopians and Park Defenders hold comfy jobs in the public administration after SDSM grabbed power in 2017.

Stefanovski’s comment that caught Naumoski’s eye is the following, often repeated quote from an interview Stefanovski made in 2008 – the year when Greece blocked Macedonia from joining NATO: “You can’t ask me not to feel as part of the deepest and oldest world, when Heraclea is my home, when Ohrid is my home, when Via Egnatia, the only highway that existed in Europe between the 5th and 15th century, traversed next to my grandmother’s home in Bitola. You can’t say that everything is on your side, and nothing is on our side”. The quote is meant as criticism of Greek nationalism, which blocked Macedonia from joining the European Union and NATO for decades, through the so-called “name issue”. Greece insists that, as Slavic speakers, the Macedonians have nothing to do with the ancient past of the region, and that all of it is the cultural heritage exclusively of Greece.

Goran Stefanovski was born in Bitola, built on the ruins of the ancient city of Heraclea Lyncestis, and in his comment he mentions Macedonians chief cultural site – Ohrid and the Roman era highway of Via Egnatia that linked Durres (Dyrrachium) with Solun (Thessaloniki).

Nationalism. But healthy nationalism. Typical of a Gastarbeiter who needs to prove that he is older and richer than his hosts. Full of dubious historic facts, said Naumoski, while quoting Stefanovski’s words.

The comment prompted a moderate level of criticism, even from Twitter users who normally support SDSM. The comment is typical of a strain of thinking in SDSM, the party which agreed not only to impose a new name on Macedonia, but also to mark monuments to historic figures in Macedonia with the words “belonging to the ancient Hellenic civilization“, to scrape off the Kutlesh Sun from all public spaces in the country, and to in general agree that the cultural and historic heritage of the region belongs to Greece, Albania, Bulgaria, Serbia – but not to Macedonia. And the on-going blockade of Macedonia’s EU accession talks by Bulgaria means that the demands for concessions are far from over.

Goran Stefanovski’s quote is often understood as criticism of the Greek nationalism, a response to the pressure exerted by Greece for decades against its much weaker neighbor, instead of jingoistic expression of Macedonian pride. But even that is now too much for the ruling party in (North) Macedonia. Stefanovski is seen as a citizen of the world, and of his beloved Debar Maalo part of Skopje, and is certainly not a writer who built a career by promoting Macedonian patriotism like, say, Vojdan Cernodrinski, but even this meekest protestation against the pressure Macedonia is put under seems to be too much for the Young Turks of the ruling party.

Goran Stefanovski’s life to be celebrated in Debar Maalo