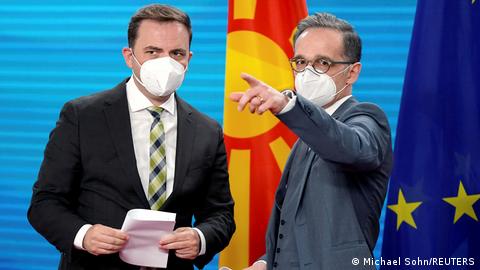 The German government believes that the dispute between Macedonia and Bulgaria should remain on a bilateral level and be resolved by experts, without external pressure.

German Foreign Minister Heiko Maas sees no reason to involve third parties in resolving the dispute, but says Berlin is always ready to help and share its experience.

After meeting with Macedonian counterpart Bujar Osmani in Berlin, Maas reiterated Berlin’s support for Macedonia’s accession talks with the EU to start “as soon as possible”.

Germany is serious about the EU perspective of the countries in the region and that especially applies to Macedonia, which has long met the conditions for the start of negotiations. That is why last year we made a lot of efforts to hold an intergovernmental conference, but that was not possible. We now support the Portuguese presidency in doing so. Not only do we consider it logical, but also necessary, to hold the intergovernmental conference as soon as possible not only in terms of the trust of the citizens in Macedonia, but also in the interest of the EU,  Maas said.