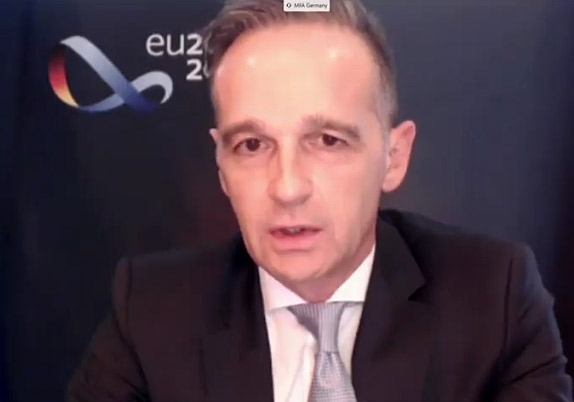 Answering a reporter’s question at a joint press conference with Macedonian counterpart Bujar Osmani and Bulgarian counterpart Ekaterina Zaharieva in the framework of the Berlin Process, German Foreign Minister Heiko Maas said that the EU enlargement process will face difficulties if Macedonia and Bulgaria do not resolve their bilateral issues.

If one of the candidates has unresolved issues, whether it be political issues or an assessment of the historical events in the region, that country would have to talk to the member states with which the problem exists and to they need find a solution. Creating a commission of historians was tasked with resolving that and I hope that a solution will be found. As long as these problems persist, it will be very difficult to organize the enlargement process and the holding of the intergovernmental conference, said Maas, whose country holds the rotating presidency of the European Council until the end of the year.

He added that the EU could not interfere in member states’ bilateral issues, and that holding an intergovernmental conference required all 27 member states to agree, including Bulgaria.

The EU cannot interfere in bilateral issues. The EU has 27 members and Bulgaria is one of them and therefore the interests of Bulgaria must be respected, that is unfortunately the case. These issues must be resolved by the two countries, that is a precondition for holding an intergovernmental conference.

Maas: Dispute between Macedonia and Bulgaria to be resolved by experts, without external pressure