In Macedonia, it has become the easiest thing to rob a marijuana growing company. After the thefts in Krusevo and Josifovo, the marijuana factory in the village of Aldanci was robbed again yesterday.

The news was published by Dragan Kovacki from VMRO-DPMNE. According to Kovacki, oil worth two million euros was stolen.

The Ministry of Interior confirmed the theft. They explain that on April 19, 2022 at 11:31h the head of the security agency reported to the Bitola police station that in the period from 18:30 h on April 4, 2022 to 06:30h on April 19, 2022 someone broke into a factory for the production of bankrupt marijuana near the village of Aldanci, in the Krusev regionon, using force and adjusted tools and took 108 bottles of cannabis oil and 6 plastic bags with needles from the flower of the cannabis plant.

The site was inspected by inspection teams from the Foreign Offices for Criminal Affairs in Krusevo and Prilep and measures are being taken to clear up the case.

The question is why the theft was reported six hours later and why it took so long. This building has a high wire fence and an alarm so it is almost impossible for anyone to enter without security noticing. The oil is also well secured and difficult to access.

As we have learned, the value of the stolen “goods” is much higher than two million dollars and reaches up to five million.

The “5 Letters” factory in the village of Aldinci near Krusevo is not unknown to the public. A robbery had already taken place in it in February. At that time, 60 kilograms of marijuana were stolen and during the inspection, undeclared quantities of cannabis were found.

In 2019, the Croatian RTL broadcast a show about what they called the “boom with medical cannabis in Macedonia”.

RTL claimed that 93% of the ownership of the company is in the hands of an American investor, while 7% is held by Zoran Janevski, a friend of Prime Minister Zoran Zaev and a member of his party. 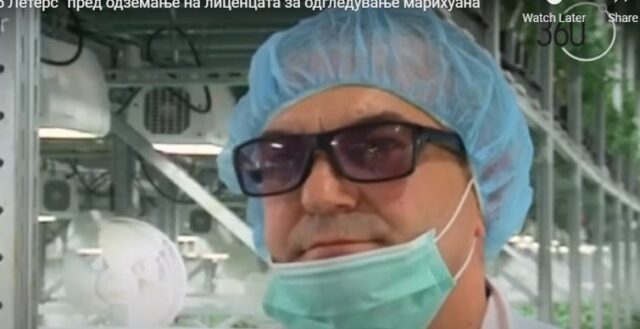 Janevski claimed that the investment could be returned in two to three years.

We do not know if Zaev’s friend returned the investment but now “5 Letters” is bankrupt and people from a neighboring country are announced as future owners.