Macedonia marks the 118th anniversary since the death of legendary VMRO leader Goce Delcev. Delcev was killed in a battle with an Ottoman army unit in the village of Banica, near Ser (Serres). The anniversary comes at a time of growing dispute between Macedonia and Bulgaria over the nature of the Macedonian liberation movement.

As leader of the national liberation movement, he organized patriotic committees and units of irregulars while helping arm the populace. Goce Delcev was born in Kukus (Kilkis) in 1872, and was educated at the Sofia military academy. After this, he took up a job as teacher in Stip, a platform which he used to propagate for liberation from the Ottomans and to organize the VMRO movement.

After his death, his body was moved in Sofia, and in 1946 it was given by the Bulgarian authorities for burial in Skopje, in the St. Spas church. Bulgaria acknowledged at the time that Delcev was a Macedonian who fought for a Macedonian state and should be buried in the Macedonian capital. But shortly after political changes in Bulgaria and the worsening relations with Yugoslavia (which Macedonia was part of) led to Bulgaria denying the national character of the Macedonians. Since 2017, Bulgaria demands that Macedonia acknowledges Bulgarian positions in its historic narrative and national identity, and since late 2020, it blocks the opening of EU accession talks with Macedonia. The national identity of Goce Delcev is one of the most divisive issues in the dispute and even under serious pressure from the Zaev regime, Macedonian historians refused to accept the Bulgarian positions. 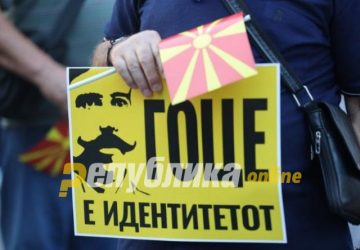 If Goce Delcev was alive today, he would have been declared “anti-western”, would’ve been scandalized and maligned. He is all what our current Government is not. He holds a mirror to their lack of morals, patriotism and love of Macedonia and is the symbol of our defiance. That is why they are afraid to speak his name, Mickoski said.