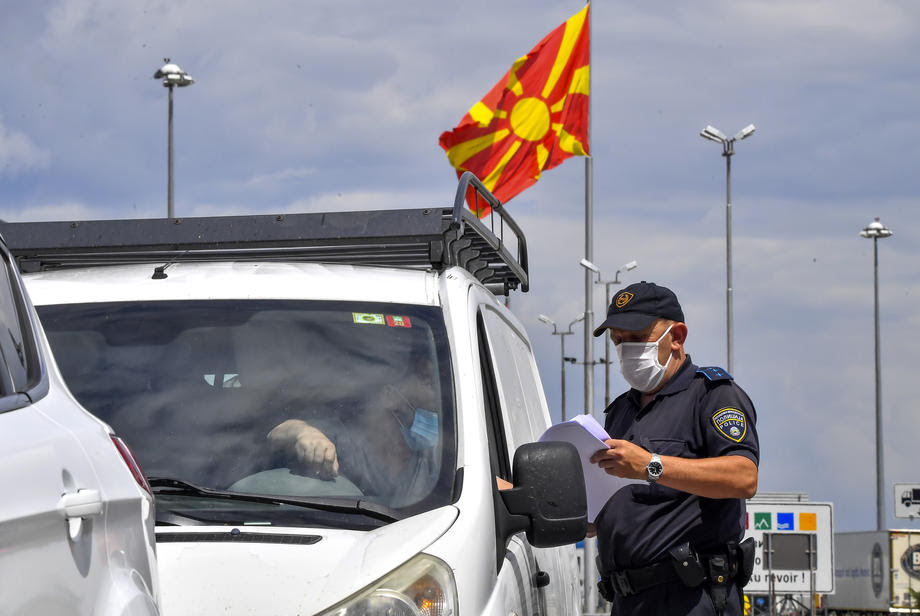 epa08490495 Police officer wearing protective mask checks documents from a passenger at the border crossing Tabanovce near Kumanovo, North Macedonia, 17 June 2020. North Macedonia?s Government has decided to open all border crossings starting on 17 June 2020. Passengers can cross the borders with condition to show a valid negative PCR test and go in 14 day mandatory self-isolation. Foreigners transiting the country for a period of maximum 5 hours can use all border crossings. The number of newly infected COVID-19 patients in the North Macedonia is still more than one hundred per day in last three weeks, which is a big number for the small Balkan country. EPA-EFE/GEORGI LICOVSKI

After allowing free entry of people without vaccine certificates or PCR tests during the entire summer season, the Zaev Government today announced that it will introduce checks starting with September 1st. Meanwhile, the number of new cases registered daily reached just under 1,000 today and the cities of Tetovo and Gostivar have turned into hotbeds of the epidemic.

As of September 1st, all domestic and foreign citizens who plan to enter Macedonia will have to show a certificate proving they have received at least two doses of a coronavirus vaccine, proof of overcoming the illness in the past 45 days or a negative PCR test no older than 72 hours. Macedonian citizens who arrive without any of this will be submitted to a week long quarantine in their homes. Foreign citizens who only want to transit through Macedonia will be asked to give a written statement and show it at the point of departure within five hours.

Additionally, the Government decided to put more restrictions on the hospitality industry. Entry in any cafes, restaurants or any mass event will be allowed only with certificate proving that the person has received at least one dose of the vaccine, or proof of overcoming the illness. This applies to people over 18 and will include events such as workshops and seminars, cultural events, weddings and christenings, concerts, betting places… Cafes, restaurants and other venues are tasked to hire security that will require the vaccine and other certificates, or, in case the venue sits less than 30 people – to task the employees to perform this task. The requirement enters into force on Wednesday.

Economy Minister Kreshnik Bekteshi said that the restriction will also apply to shopping malls – which have so far been exempt from any restrictions.