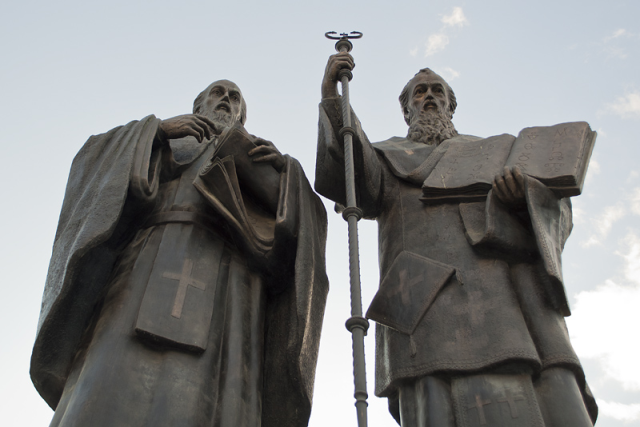 And while Macedonian Government officials offered congratulations on the day of Ss. Cyril and Methodius in broad, bland terms, Bulgarian Prime Minister Boyko Borisov spoke of the national pride of Bulgaria in the two sainted brothers. Although they lived a millennia ago, long before the modern nation states, Cyril and Methodius and now disputed between Macedonians and Bulgarians over who they “belong to”, just like other historic figures. Bulgaria is using the 2017 Zaev – Borisov treaty to get Macedonian historians to rewrite their historic narrative and to declare various historic figures as ethnic Bulgarians, threatening that it will block Macedonia’s EU accession unless Zaev delivers.

As a result, the letters sent on the day of Ss. Cyril and Methodius by Zaev, his interim Prime Miniter Oliver Spasovski and other SDSM officials contained no mention of the Macedonian pride in the saints who translated the Bible into Old Slavonic and devised the first Slavic alphabet while spreading Christianity across much of Europe.

Zaev referred to the sainted brothers as “enlighteners of all Slavs” who “paved the way for the Slavic peoples” toward literacy. Spasovski also used the “all-Slavic” term and used the Macedonian flag emoji instead of the name of the country in his tweet in which he said that their work is important for “the ‘Macedonian flag emoji’, Europe and the world”.

Borisov, on the other hand, had no doubt which nation gave the saints to Europe. “I congratulate you on the day of Bulgarian education and culture and Slavic literacy! It is with a sense of national pride that we bow before the work of the sainted brothers Cyril and Methodius, thanks to whom we can freely speak our native language and have preserved our spiritual identity as a people and as a state”, Borisov wrote in his message.

The two countries separately celebrate Cyril and Methodius each year in Rome, where St. Cyril was buried. Under the Zaev – Borisov treaty, these events should become shared, and jointly organized, although this year the event was not held because of the coronavirus epidemic.