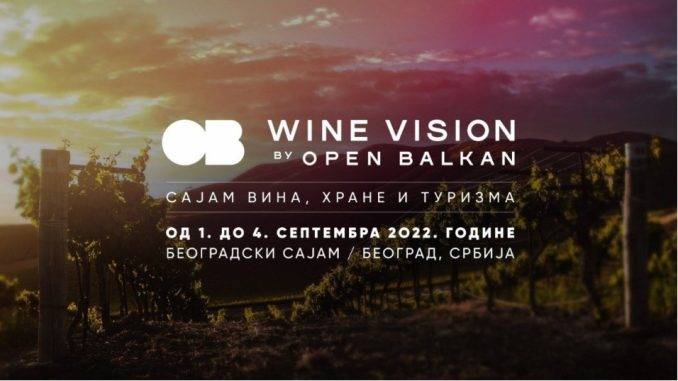 Organized by the governments of Serbia, Macedonia and Albania as part of the Open Balkans initiative, the first ‘Wine Vision by Open Balkan’ wine, food and tourism trade show will feature over 330 exhibitors from 22 countries presenting their products and services on Sept. 1–4 in Belgrade, Serbia.

According to an official press release, exhibitors include 233 companies from the Open Balkans member states.

Forty-two wineries and three distilleries from Macedonia will present over 300 wines and brandies. The country, under the slogan “Taste life,” will also showcase authentic Macedonian food products.

Serbian President Aleksandar Vucic, Macedonia’s Prime Minister Dimitar Kovachevski, and Albanian Prime Minister Edi Rama will attend the opening of the trade fair on Sept. 1. The next day, they will participate in an Open Balkans leaders’ summit.

Later on Sept. 2, PM Kovachevski will host a “Macedonian Evening” to promote Macedonian wines, food, music and tourist attractions to businesspeople and decision-makers from Serbia, Albania and Macedonia. The event will feature a performance by Vlatko Stefanovski.

In addition to wine tastings, trade show visitors will have the chance to taste dishes prepared by top Macedonian, Serbian and Albanian chefs. The fair will also host a wine competition judged by 25 international wine experts, five of whom are master sommeliers.

By participating in the trade show, the state is seeking new markets for Macedonian food and wines in order to increase exports and boost the economy.

According to Kovachevski, the ‘Wine Vision by Open Balkans’ will also be a networking opportunity for winery and vineyard professionals to connect with suppliers and service professionals so they can discuss developing the industry and breaking into world markets.

Exhibiting at the trade fair is also expected to help the local travel industry through promoting Macedonian culture, tradition, customs, identity, folklore, music and cuisine as well as those of the other communities living in the country.

Representing Macedonia’s travel industry at the trade show floor will be the Agency for Promotion and Support of Tourism. Its exhibit will promote Macedonian wine and food tourism, but also rural tourism and nature and adventure tourism through presentations on the country’s national parks, natural and artificial lakes, and UNESCO-protected areas.

Kovacevski: Open Balkan is an excellent initiative, but no substitute for EU

Escobar: “Open Balkans” is not a political but an economic project, the US will do everything to stabilize the region