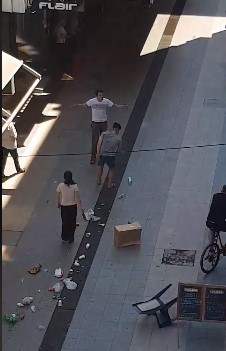 A dramatic incident was caught on tape today at the Leptokarija shopping center in downtown Skopje. Residents recorded a fight between a man and a woman, who confronted another man. The woman is waving what appears to be a meat cleaver during the incident.

Several passers by tried to calm down the people involved in the incident, but ultimately the man who was being chased had to flee. The other man is seen throwing rocks and debris at him, while the woman keeps swinging the cleaver at him.

There is still no official report about the cause of the incident.