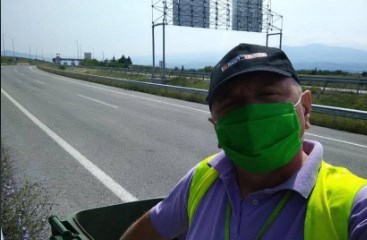 Perica Filipovski, father of three children employed in the national public roads utility company, claims that he was demoted at work because of his political positions.

Filipovski was working at a highway toll booth. He was also outspoken on social media, as a critic of the Government. He shared with the public that, as result of his comments, he was demoted to a street sweeper.

No work is hard when you have to do it. My time has passed, and I have to think of the young ones, they mustn’t be left without bread because of my political positions, Filipovski said, while sharing the demotion order.

Before being appointed Prime Minister, SDSM party leader Zoran Zaev famously promised that he will be “eating people alive” and will replace the public administration, “from the top managers down to the cleaners” with SDSM party activists.