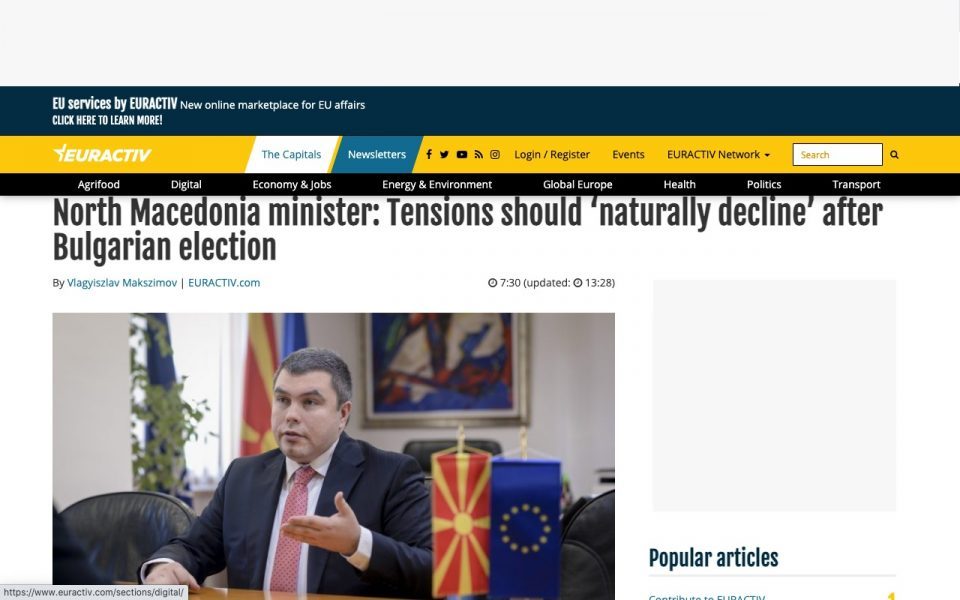 In the interview Maricic says that with intensive dialogue after the Bulgarian elections, we can reach an agreement if we have a genuine willingness and if we are looking for a solution that is based on mutual respect, on rationality, on European values, and on modern, 21st-century concepts.

Asked if it is a good strategy to wait for the outcome of the ballot, given that there appears to be a cross-party consensus in Bulgaria on the veto against Skopje, Maricic said Macedonia needs to see who its negotiating partner is.

EURACTIV pointed out that Skopje has twice asked for the extradition of Gruevski, who is a close ally of Hungarian prime minister Viktor Orbán, with little success.

We agreed then, when this happened, that apart from the strong differences that we have on this particular case, that will not harm our general relations and I can reassure you that so far, those relations have been at a high level, the minister said.

In the interview the justice minister said that the country is acutely aware of the importance of media freedom, learning from the times when Gruevski was in power. This is why we’re very careful in what we can do and how we follow the situation with the media financed by Hungarian companies, he said.

So we’re not approaching [this] with a prejudice. Because every foreign investment is welcome, regardless of whether it comes from Hungary or any other country. But, of course, it needs to be in accordance with all the laws, Maricic told EURACTIV.

EURACTIV reminds the government in Skopje is preparing to hold a national census, the first one in 19 years. The last attempt to hold a population tally in the ethnically diverse country was called off after immense political backlash in 2011.

What is different this time is that the census is fully implemented by the experts and not by politicians, Maricic said, pointing out that the count will meet the standards of the EU’s statistical office, Eurostat.

Regarding the criticism from Bulgarian MEP Angel Dzhambazki that Macedonia has 130,000 Bulgarians who are Bulgarians but are not entitled to declare themselves as Bulgarians at the forthcoming census, Maricic said it was “manifestly untrue that the Bulgarians will not be able to register, to the contrary, all the ethnic groups … are having the same chance”.

In the 2002 census, only about 1,500 people out of two million declared themselves as Bulgarians.

According to Maricic, “many or most of these people who have taken Bulgarian citizenship have done it for more predominantly economic reasons because this gives them a chance to work abroad, in the European Union, without any special approvals or licences”.