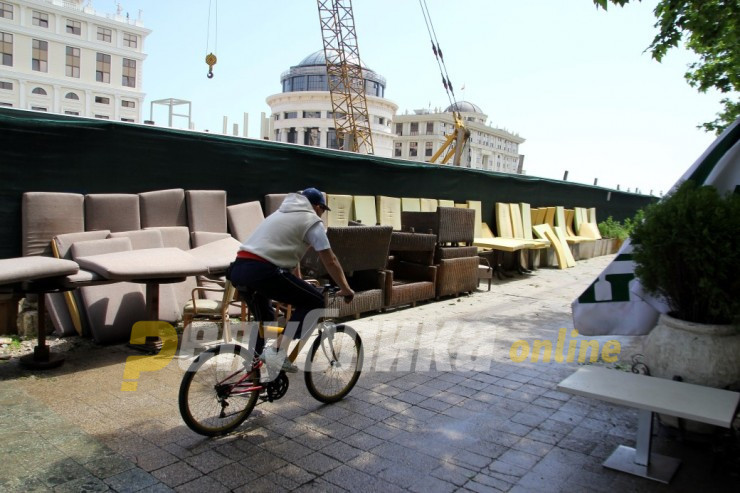 The City of Skopje confirmed plans to remove the long line of terraces on the Macedonia Quay, along the Vardar river. The site is one of the best loved promenades in the city, with numerous restaurants and bars, but will be replaced with a street, the city said.
The plans go back to the construction of the Macedonian Telekom building on the Macedonia Square. The building required a street connection, and the investor was supposed to build an underground street. But due to the notoriously high levels of underground waters, especially along the Vardar, the plan was scrapped.

A part of the quay was officially designated as a street years ago, despite protests from pedestrians and restaurant owners. It was never put in actual use, although cars can be seen trickling through the quay. But now the city said that it will completely redecorate the area, and will remove the extensions of the restaurants built in the middle of the quay, using light construction. Over summer, these areas are turned into very popular shaded, open air destinations for the people of Skopje and tourists alike.

We are talking with the owners to find a solution that will work for all. But we will not compromise with the availability of public spaces. The previous city administration freed the Macedonian Telekom from its obligation to build an underground link and we must find an access route through the quay, the city said.

As the municipal elections draw closer, VMRO lists all the broken promises made by Skopje Mayor Silegov

Mayor Silegov asks his party for a second term, other mayors in Skopje face female rivals