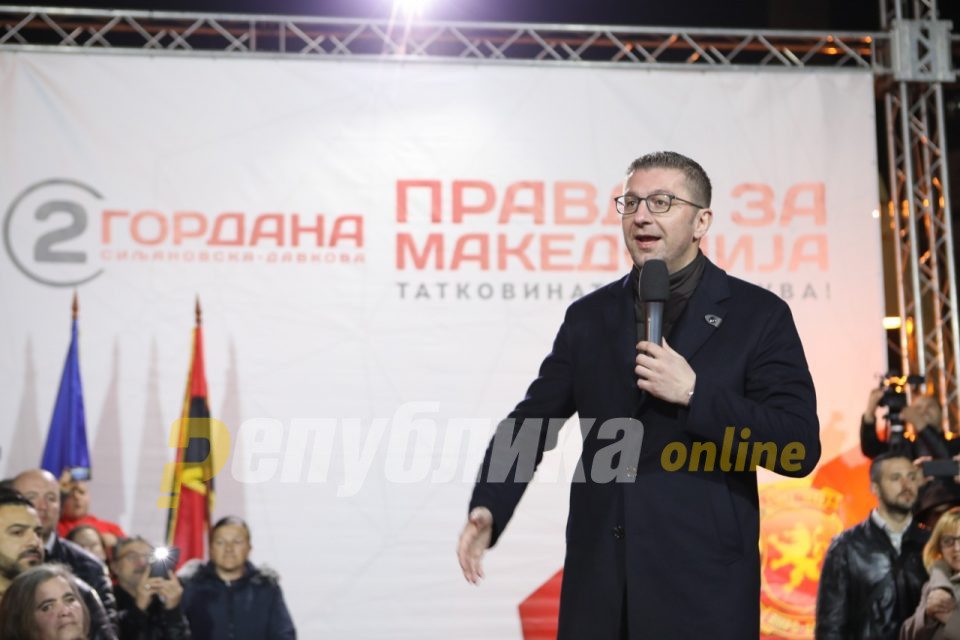 Opposition leader Hristijan Mickoski painted a dire picture of the situation in Macedonia during his rally in Bitola on Friday evening. Mickoski blasted Zaev for his cynical promises that the SDSM led Government will help bring back the young people who emigrated out of Macedonia.

Not only nobody came back, but hundreds of thousands of our fellow citizens are packing up and preparing to leave the Republic of Macedonia. And yet, Zaev tells us things are going so well we’ll have to bring in migrants soon to boost our workforce. I’m not sure if I should laugh or cry, Mickoski said.

The farmlands around Bitola, among the best in Macedonia, were hit hard by the drop in prices for some of their main cash crops, especially the apples in the near-by Prespa region. Mickoski visited some of the rural communities around Macedonia’s second city to see the situation first hand.

People are taking chainsaws to their orchards because there is no money to be made anymore in this country. They tell me that up to 500 people are leaving the country daily, they see no future here, Mickoski added.

Bitola’s urban districts turned out strongly in support of SDSM in the 2016 elections, after years of supporting the conservative VMRO-DPMNE. SDSM carried the city strongly in the 2017 municipal elections, but then saw a significant drop in turnout as it tried to push the voters to support the name change in the September 2018 referendum.

Punish them here, in Bitola, it will hurt them the most, and vote for professor Siljanoska, Mickoski said during the rally.

He asked the people of Bitola if they had forgotten how SDSM treated their city, especially the dramatic collapse of the large TAT pyramidal banking scheme in the city in 1997, which affected 13.000 savers and drew tens of millions of dollars from the region. It is estimated that some 100 savers from Bitola who lost everything in the collapse killed themselves, and no officials from the then SDSM led Government which publicly supported the TAT owner Sonja Nikolovska were held responsible.

Bitola was also hit hard by the collapse of several major industrial facilities during the SDSM led “transition” process, when powerful Communist officials would deliberately break up and bankrupt state owned companies and then buy the choicest parts. By contrast, the Nikola Gruevski Government worked to bring manufacturing back into the region and a major German car parts producer all but ended blue collar unemployment not only in Bitola but in the entier Pelagonija region.

As the Zaev regime is perpetrating political persecution under the guise of fighting crime, Mickoski called on the voters to ensure, with their votes in the presidential elections, that cases of serious crime perpetrated by SDSM officials are punished as well.

Zaev never apologized to Bitola for TAT, for the criminal octopus their Government put in place, for the crimes of the transition, for the ruined lives of so many people. Zaev must also apologize for his own, personal crimes, for the bribes we all saw him request, Mickoski said.

The opposition leader also urged the voters to resist the calls to boycott the elections. Some activists who, along with the VMRO party, successfully campaigned among the voters to boycott the September 2018 referendum to rename Macedonia, are calling on the voters to do the same with the presidential elections. Unsatisfied with the way in which the Zaev regime overruled the referendum outcome, and also with the VMRO presidential candidate, they insist that a boycott would be a more forceful way to delegitimize the imposed name change. But, Mickoski warned that some of these activists are actually cooperating with SDSM.

There will be calls to boycott the elections so as not to legitimize the new name. I understand those people. Many of them mean well. Every day, more and more of them give up on this idea and join us. But there are also those who merely pretend to be concerned patriots. They are part of a scenario developed in the SDSM headquarters on Bihacka street. Their real goal is to divide Macedonians, to divide Macedonians with Albanians, Turks, Roma, Bosniaks. We will not forgive and forget, Mickoski said.

Mickoski calls on Zaev to withdraw his census law