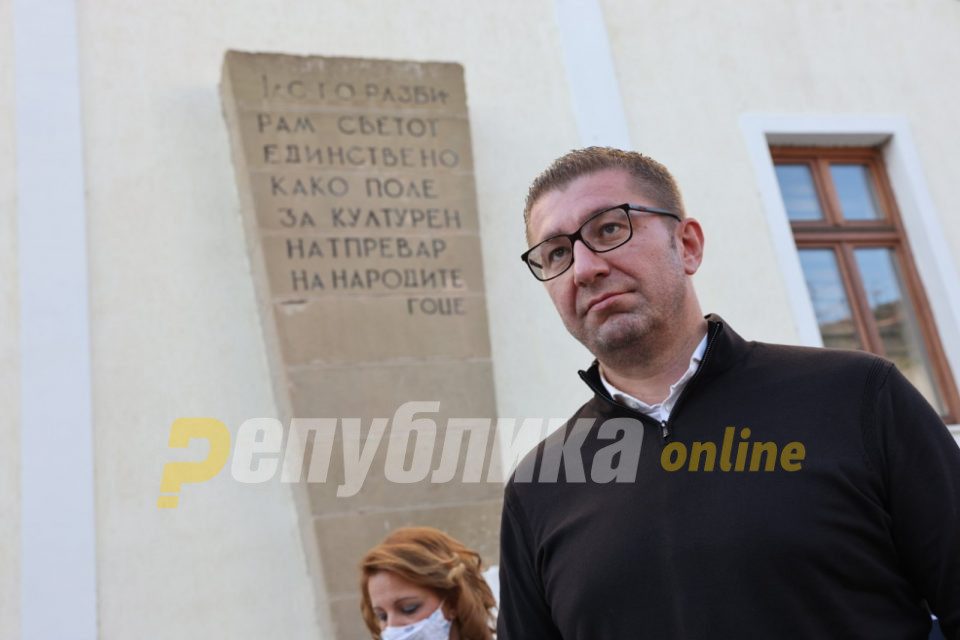 Macedonia can’t accept more concessions. We built this country with blood and struggle, and it is time that the international community now gives, and stops just taking from us, said VMRO-DPMNE leader Hristijan Mickoski when asked about the demands for new concessions on historic and national identity issues toward Bulgaria. Bulgaria is blocking Macedonia from opening EU accession talks until the Zaev regime delivers on what he has apparently promised.

Enough. For too long did the Macedonian people and all other peoples who live here in Macedonia, made concessions. Enough. We had a name like no other in the world, we had an interim reference name, we won the name suit in the Hague but we were told that this victoruy is in vain because might is stronger than international right. We changed the flag because somebody objected to it. When we were forced to amend the Constitution to push this new name through the citizens were told it will be the last concessions. We want to be in NATO and the EU, we want better healthcare and education, but we want the pressure to be put on Bulgaria, on the hegemonistic politicians who live in the 19th century. We want the politicians who came here to be true to their word, Mickoski said.

Bulgaria expects Zaev to deliver along the lines of his BGNES interview last November and its leaders have openly supported keeping Zaev in power until he does.

Mickoski vowed to bring down the Zaev regime before he inflicts new disasters on Macedonia. “Every mature politician who means well to Macedonia, regardless if he is from SDSM, DUI, anywhere, realizes that this majority in the Parliament is pushing Macedonia into an abyss. We have not given up on our idea to form a new majority in Parliament, which will govern Macedonia far better than this majority, Mickoski said.

Zaev has only 62 votes in the 120 seat Parliament and his “majority” is often unable to convene a session. “We have a 50-50 split. It’s a difficult situation and the Government can’t act alouf, as if it has 100 votes”, Mickoski said during his TV21 interview.