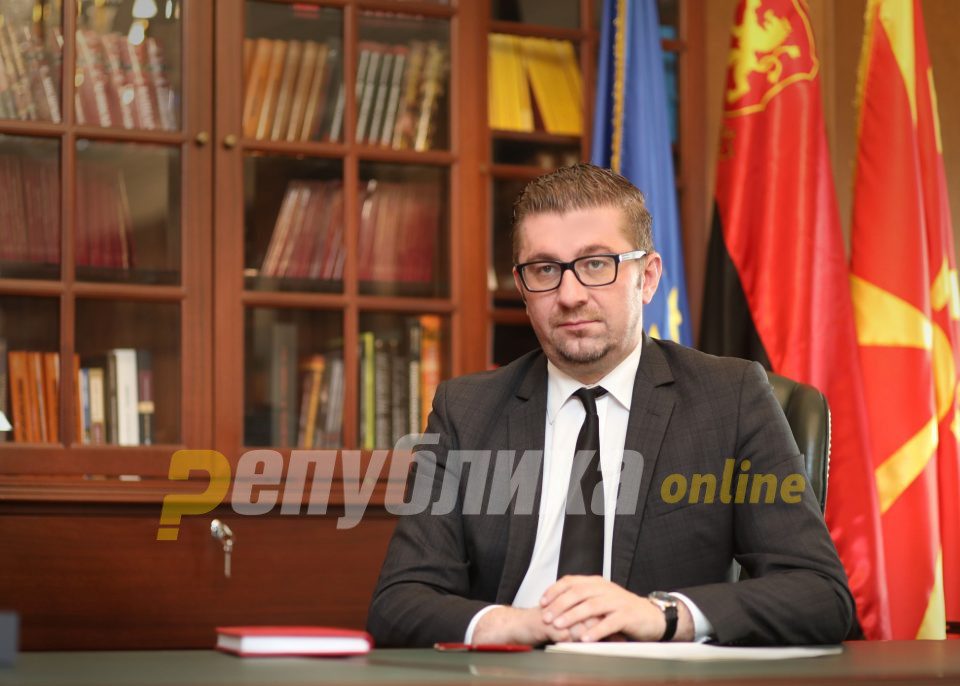 Within months Zoran Zaev will be held to account for all he did, said VMRO-DPMNE leader Hristijan Mickoski in an interview today. Mickoski announces a significant victory at the coming 2020 elections, which the opposition wants to see held in March, but warns that it will be difficult to overturn the Prespa treaty overnight.

Zoran Zaev is drowning and is now clutching at straws. He is using a belligerent language to mobilize his supporters, but also to conceal the fact that his own SDSM party is dividing in factions. Otherwise, why wouldn’t he want early elections, if things are going as well as he says. We see that Zaev is scared, and he will get even more afraid as the polls continue to pour in. He is trying to avoid holding early general elections, and to prolong his political career for a few more months. At the same time we are aware that holding early general elections requires numbers in Parliament which we currently unfortunately don’t have but we will continue to use all democratic tools to spark early elections, Mickoski said. According to him, the opposition currently has a lead of some 100.000 votes, which will translate to about 10 more seats in Parliament.

If elections were held today, VMRO would win by at least 100.000 votes over SDSM, Mickoski says

Discussing the Prespa treaty, Mickoski acknowledged that it will be difficult to remove it, given the high requirements to alter the Constitution. Mickoski hints that the fight to restore the name of Macedonia may be best led once the country is a member of the institutions such as EU and NATO.

We have a principled and honest position on this before the citizens. Constitutional amendments require 80 votes in Parliament, and the Badinter majority (majority of ethnic minority members). We can write as much as we want sitting behind our keyboards and label people traitors, but we have the obligation to tell the truth before the voters. VMRO-DPMNE preserved its honesty by not legitimizing the Prespa treaty, and the only further step we can take is to win the general elections, to place Macedonia on the fast track to join the European family of nations, and then we can review our options. It is simple, but it takes a lot of work, a lot of restraint, help from the diaspora and from the citizens of the Republic of Macedonia. Help us win and implement the reforms, so we can rectify this injustice within the European family of nations, Mickoski added.

Mickoski calls on Zaev to withdraw his census law

Mickoski: If there was a mood for enlargement in the EU, they would’ve put pressure on Bulgaria