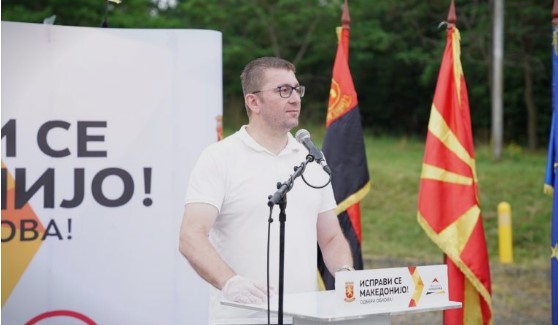 VMRO-DPMNE leader Hristijan Mickoski on Saturday visited Kriva Palanka for meetings with its residents two days before the campaign for the July 15 parliamentary elections ends.

VMRO-DPMNE will hold a rally in Kriva Palanka in the evening after visits to the towns of Kratovo and Rankovce.

VMRO-DPMNE, said Mickoski, during the campaign presented its ‘Renewal’ project, elaborated in a 360-page program, where the opposition party pledges it will increase salaries and pensions, provide EUR 4 billion in investments from local and foreign companies, EUR 640 million in farmers’ subsidies, and it will pursue reforms in the healthcare and the judiciary.

We believe we’ve had a successful campaign and we believe the citizens will vote for us on Wednesday, the VMRO-DPMNE leader told reporters, adding VMRO-DPMNE would deliver on its promises after the elections.