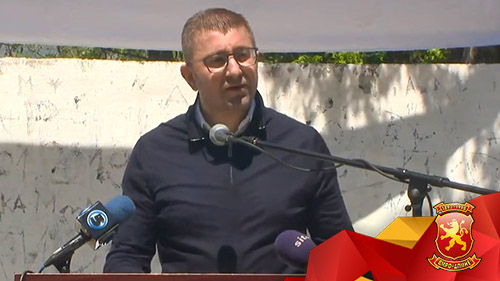 In his address on Europe Day and Victory Day in Prilep, the leader of VMRO-DPMNE, Hristijan Mickoski, underlined that Macedonia is the only country in the Balkans that acquired statehood through the anti-fascist national liberation struggle, and that Zaev is now trampling on that.

In his speech, Mickoski said that the Macedonians have an obligation to observe these days and events, because Macedonia also showed defiance, toughness and struggle in difficult times, and was on the right side in the struggle for national liberation, in the fight against fascism, at a time when many other nations and countries in the neighborhood and in Europe were not.

Hence, today we as a country, as Macedonia, have the legitimate and full right to invoke our heritage and contribution to building a free Europe. Because their freedom is also our freedom, because our blood was shed on the foundation of our common freedom. Our ancestors did not embarrass, and they were on the right side, the question is whether the current government preserves that heritage and embarrassed our ancestors?, he said.