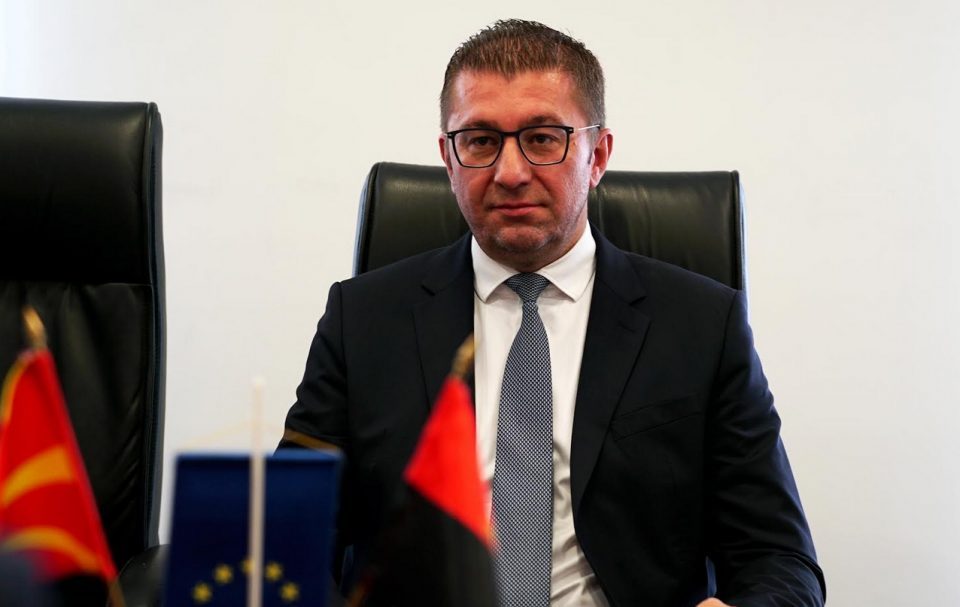 There is are negotiations for Goce Delcev and the Macedonian language, it is a done deal, it is an acquired right. Goce Delcev is part of our national identity. Based on that character, we have created a state, said VMRO-DPMNE leader Hristijan Mickoski in an interview with Radio Free Europe.

Yes, we have heard that. You say that Zaev brought the country into this situation. I ask you what is your position as a party?

Zaev is guilty of many things. But in this case a helping hand was offered by the opposition and I said that at the first leaders’ meeting we discussed the early parliamentary elections, it was the first meeting with Stevo Pendarovski when the early elections were to be held on April 12. The meeting took place somewhere after the fiasco at the October summit of the European Council when we did not receive a clear message for the start of negotiations and which we still do not have, although it was announced two years ago. Even then I said to respond to the memorandum which was a product of the Parliament of our eastern neighbor. And to give a response with a consensus from all political parties, in that way we will outline our common state position and it will practically be a position that will be backed by all serious political parties that have seats in Parliament. Then, Zoran Zaev and Stevo Pendarovski were convincing me that the document that was prepared in the Bulgarian Parliament is a document that practically served for the local elections in our eastern neighbor. And today, now we see again a rough manipulation with the public, and the public should know that, and that is that the solution was that our eastern neighbor would celebrate Goce Delcev as theirs, and we would celebrate Goce Delcev as ours.

Is that solution acceptable for VMRO-DPMNE?

This is the situation now, now we celebrate Goce Delcev as a Macedonian, what is he, as a man who fought for this modern Macedonian state, who is sung in our anthem, which is part of our identity. Why do we negotiate when it is like that now, and our eastern neighbor celebrates it as theirs. They have the city of Goce Delcev, etc. What is the difference from the current real factual situation? Why are we faking talks now, if we are negotiating for this? It is so now. But that is not the goal. Just look at the last statement of an MEP who comes from the ranks of the ruling party in our eastern neighbor and he will tell you that it is not that so. According to them, this way of approaching the character and work of Goce Delcev was a false Yugoslav history, that the textbooks should be changed, that the history should be completely changed, practically we should accept the negotiations for the character and work of Goce Delcev as a state to accept that we are a nation that exists since 1945. Is there a greater humiliation to negotiate and say that our ancestors – my grandmother, my grandfather, my great-grandmother and great-grandfather who died fighting for Macedonia, who spoke Macedonian, to annul it all and erase it, because now someone incompetent politician put that on the negotiating table.

What is the solution in your opinion, Macedonia to stop the negotiations if this is on the table?

When comparing two things, they should be compared on equal terms. You can’t compare when you run 800 meters and when you have a 100 meter race and say you ran the first 100 meters of these 800 meters four seconds slower than when you ran a 100 meter race. We need to compare the conditions in which VMRO-DPMNE competes. I can also compare the conditions when VMRO-DPMNE ran in the parliamentary elections from the position of opposition.

The very fact that we have a government that has no political depth and breadth, nor wisdom, but the only way it works is pressure, threats, blackmail and bribery gives you an answer to your question. I am not saying that conditions in the past may have been better or worse, but now what happened in this Taliban election, I gave you an example with the changes in the election code, was catastrophic.

Do you have any analysis other than this over the lost votes of VMRO-DPMNE, why did this happen? Why didn’t people come out more massively, except for pressure, threats and blackmail?

We also conducted a field and telephone survey with serious houses and I can tell you that when asked – Why did you not go to the polls, about 25 percent of the respondents said it was because of fear of the pandemic, and forty percent said due to health problems, which can be also put in the group that they were afraid of contracting the virus, which means that 65 percent of those who did not vote said it was because of the Covid crisis, and the other 35 usually do not go to the polls.

You can watch the full interview with VMRO-DPMNE leader, Hristijan Mickoski on the video below.

Mickoski: VMRO-DPMNE has 95% new candidates for mayors who will work honestly