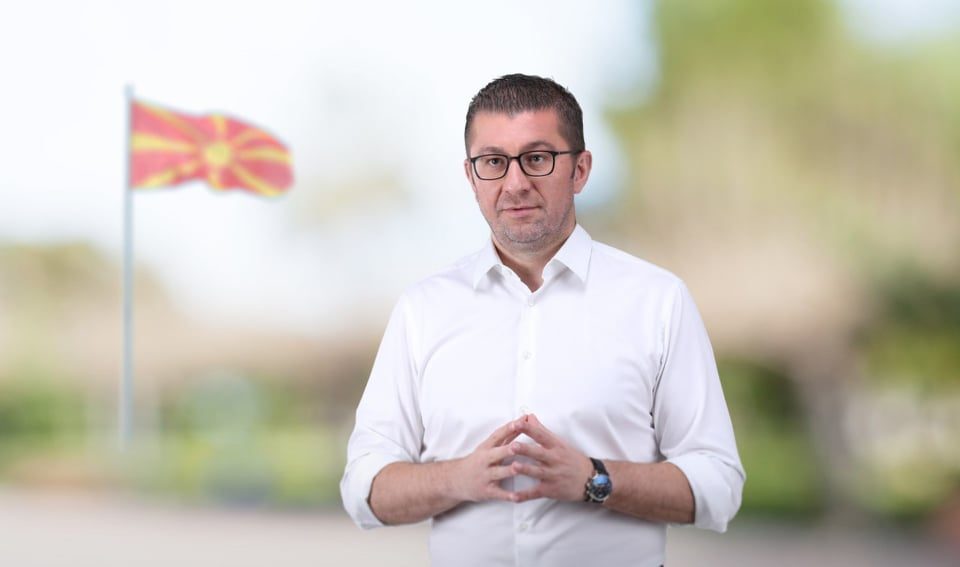 International treaties need to be respected, what also needs to be respected are sovereign policies which we, as a party, pursue, said VMRO-DPMNE President Hristijan Mickoski in an interview with Deutsche Welle, when asked about the opposition party’s position on the Prespa treaty.

VMRO-DPMNE did not participate in the treaty nor in the repressive campaign to blackmail members of Parliament that followed. If we compromise with the law and the Constitution for our political gains, we have no future. These humiliating agreements didn’t deliver on what they were supposed to. Our position is clear, if we win 80 seats in Parliament and secure the Badinter majority (majority of ethnic minority members of Parliament) we are ready and that will open the door to make a step back. There are people who say we should not go back, and there are those who say we should tear the treaty up immediately. Neither approach resolves the problem. The truth is in the middle and we want to have an honest approach toward the citizens. If we tear the treaty up the problem created by this incompetent radical will remain, Mickoski said speaking about Zoran Zaev.

The leader of the conservative party which leads in the polls ahead of the April 2020 elections said that VMRO-DPMNE was frequently tarred as a nationalist party by the Zaev Government, in its “fake news correspondence with Brussels and Washington”.

They said we will boycott the presidential elections – we beat them to a draw in the first round and only lost due to electoral engineering in the second round. They said that VMRO-DPMNE will boycott the EU agenda. On the contrary, we remained in Parliament. They said we will stage violent protests – never happened. In the midst of the racketeering scandals we were even attacked in our party for not taking to the streets. We gave them a chance until October, we wrote to our sister parties in the EU to support the opening of accession talks. That is moderate patriotism, unlike their incompetent radicalism, Mickoski said.

Regarding the other treaty signed by Zaev – the one with Bulgaria – Mickoski said that it is unacceptable to him and to the bulk of the Macedonian public to have the Macedonian language declared a dialect of the Bulgarian language and to say that Goce Delcev was a Bulgarian.

If the condition is to give up on the Macedonians living in our eastern neighboring country, then we betray all those who fought over the years, as we betrayed those in Greece with the Prespa treaty. Maybe some mistakes will be irreparable, but we can’t paint everything with black and white. We respond to red lines with our own red lines. What is the alternative, are we supposed to mumble when Goce Delcev comes up during the national anthem? Are we to accept that the language we speak now is not Macedonian?, Mickoski told Deutsche Welle.

His promise following the elections is that VMRO-DPMNE will reform the judiciary first, with the initial effects felt in the first 100 days of the next Government. Mickoski cited the excessive wealth reported by many judges which can’t be explained with their salaries alone. Mickoski pointed to the growing calls from the SDSM party to postpone the elections, and says that this is attributed to Zaev’s fears of being held accountable for his crimes.

He is not as afraid of losing he elections as he is of what comes next. I’m convinced that the elections wil not be postponed – what would that mean for the credibility of President Pendarovski who called the leaders of the political parties where we reached this agreement? The elections will be held on April 12th, the technical government will be formed on January 3rd and after his defeat Zaev will be held accountable. I understand that he is afraid, he knows what he has done, he knows about the all crimes and the corruption and the daily humiliations of the past three years. He needs to become aware that the accountability is coming for him and for all those around him who engaged in crimes, the opposition leader added.

Mickoski warned that the Zaev Government will try to buy votes with the hugely increased budget it is proposing which contains promises of salary increases for doctors, teachers, retirees. “This is an attempt at corruption and is insulting for the citizens. Zaev thinks that the people will forget his policies, the Louis Vuitton bag, his gaffes and primitivism. They will see what will happen to them on April 12th. These are decisive elections, whether Macedonia will have a radical, incompetent political establishment, or if it wants to have decent, moderate patriots”, Mickoski said.