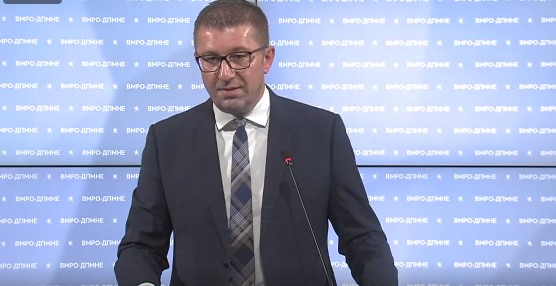 VMRO-DPMNE President Hristijan Mickoski said that President Stevo Pendarovski violated the Constitution when he awarded the mandate for the creation of the next Government to SDSM party leader Zoran Zaev. After a press conference, Mickoski led the VMRO group in Parliament toward the residence of President Pendarovski.

VMRO-DPMNE and SDSM are virtually tied after the chaotic July 15 elections and are both far short of the needed 61 votes. The Constitution requires that the President gives the mandate to a candidate of a party or parties who has majority in Parliament. During the awarding ceremony today, Zaev acknowledged that he doesn’t have the votes he needs.

I expect that Pendarovski will meet with me so we can discuss the reasons with which Zaev persuaded him to give him the mandate. We ask that he explains the legal basis on which he gave the mandate to Zaev, Mickoski said.

He said that he requests that Pendarovski meets him and one additional member of Parliament from VMRO-DPMNE to discuss the issue.