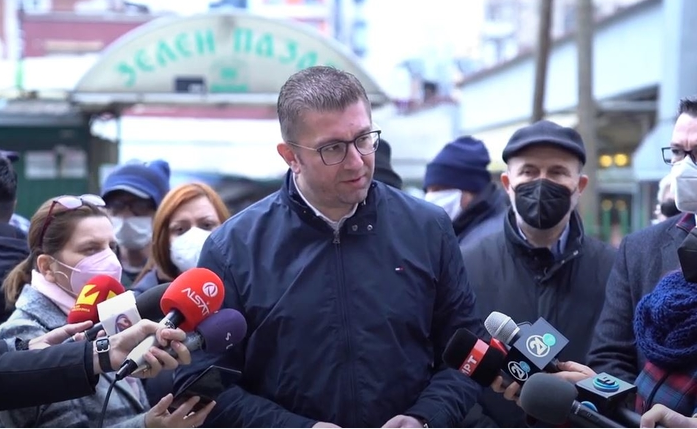 Asked by the press about the balance of power in the Parliament, opposition leader Hristijan Mickoski said that it will soon be clear whether representatives from the ruling coalition join the opposition. Mickoski announced that members of Parliament who support Zaev’s very narrow majority (62 seats out of 120) are in talks with the opposition to switch sides.

There are new developments in this regard. Be patient. Very quickly we will know whether I am right or Zoran Zaev is right. At the moment we need discretion to work toward the main goal- which is to bring down this Government, Mickoski said. He only clarified that some of the parties who are in Zaev’s coalition may be splitting away from him. Zaev’s SDSM relies on half a dozen smaller parties to prop up its numbers, as well as on DUI and BESA.

He predicted that Zaev will accept holding early elections, likely along with the municipal elections planned in October, despite Zaev’s recent protests that this will not happen. The 2020 “corona elections” delivered a very low turnout, chaotic vote counting and an evenly split Parliament, in which Zaev just barely renewed his coalition with DUI and added the BESA party to his ranks, all for a very slim majority.

It is important that this Government goes and is held accountable for what it did. We see their results, the horrible ratings on the Transparency International ranking, they are declared a “hybrid regime” by the Economist, Heritage sees us going down on the scale of doing business. You see what is happening. And all we have left from the EU integration is the sense of humiliation and the insults which the Macedonian people are exposed to, Mickoski said.