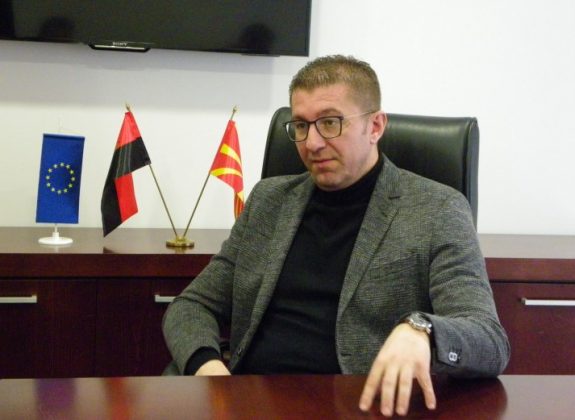 The current government has neither a recipe nor a strategy on how to move the Macedonian economy, and instead we have unrealized projects and numerous false promises, bypassing laws and regulations, whose consequences are felt by the citizens and the state as a whole, said VMRO-DPMNE leader Hristijan Mickoski in a Christmas interview for NetPress.

In the interview the leader of the opposition in Macedonia says that the government’s handling of the corona crisis is terrible resulting in Macedonia being among countries with worst number of Covid-19 deaths in the world.

He also reminded this was an extremely difficult year for the farmers, with many promises not fulfilled, with the purchase price of tobacco and grape being historically the lowest, which caused major damage to growers.

The same thing happened with the rice producers, in December they blocked the highway Stip-Kocani, the same thing happens today with the apple producers, apple growers, fruit growers and so on. But not only that, a huge revolt based on the information we receive from Pelagonija and other farmers. So this was a really difficult year and it is a result of the lack of strategy, the lack of vision in agriculture. Practically, I believe that this type of vision and strategy will not exist in the future either, because I do not see it, if you look at the SDSM program you will see that there is no such thing, it is a pale copy of some of the former programs of VMRO- DPMNE. So, I expect the revolt of the farmers to escalate further, Mickoski said.

Regarding the Makpetrol deal, the opposition leader it is really scandalous case and it is very important for the public to know what is happening with that case because they are trying to distort the truth and present it as part of the EU negotiation process or some kind of condition.

Yes, Macedonia does need to implement a number of reforms related to the European Energy Community, but the European Energy Community does not say the price at which we as a country should buy the shares owned by “Makpetrol” in the GA-MA gas pipeline, Mickoski said, adding that with the deal, Zaev will pay 14 million EUR over the estimates of Makpetrol’s shares with suspicions that in this way, they will buy the favor of TV Telma, owned by the company “Makpetrol”, in order to  completely ignore and censor the opposition.

Asked about the “Global” shopping mall fire, Mickoski says it is a terrible tragedy as a result of the illegal manner it was built without proper firefighting protection when Zoran Zaev was mayor of Strumica.

It is the fault of those who built Global and those who allowed this to happen later, he said.

Mickoski said that many of the questions arsing from the “Global” fire will be answered when VMRO-DPMNE will elaborate with evidence on the case.

I hope that they will arouse interest in the Public Prosecutor’s Office, because we may file a number of charges, he said.