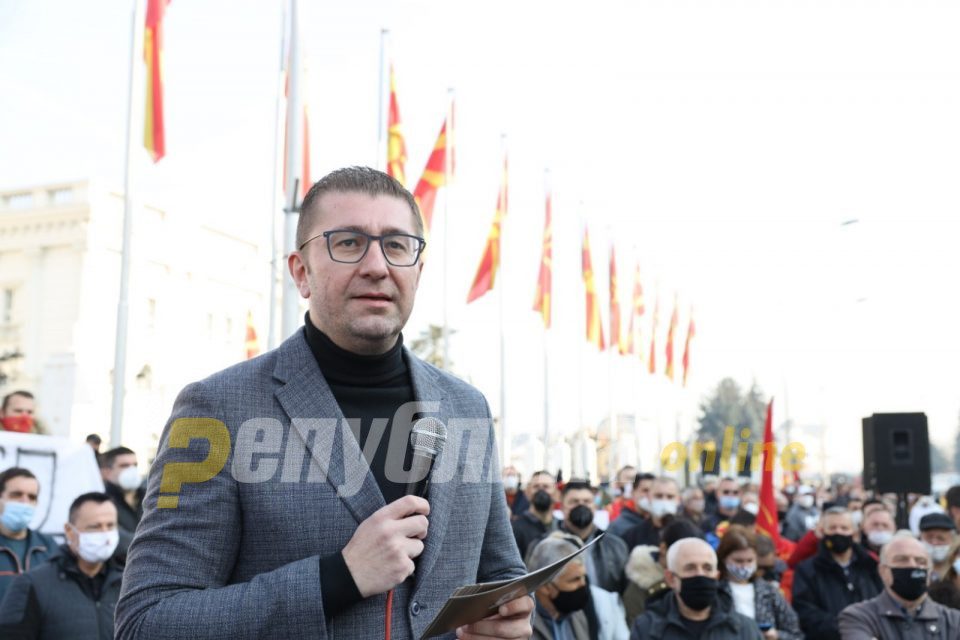 VMRO-DPMNE President Hristijan Mickoski warned that the crucial negotiations between Bulgaria and the Zaev regime are coming down this weekend and Zaev is getting ready to accept all Bulgarian demands.

I have been informed that Macedonia is being carved out in Sofia this weekend. The future of our identity is being negotiated away. We must blockade Macedonia, we mustn’t allow these people to sell our nation, our faith, our skins, Mickoski said during the rally VMRO-DPMNE held in Skopje today. 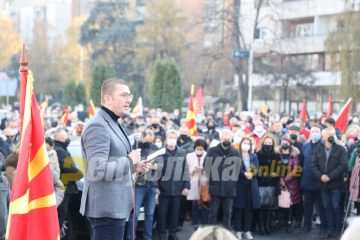 He urged the citizens to continue coming to protests, to prevent the rewriting of Macedonian history and to “make Zaev history”. The protests are being organized after, in an interview, Zaev clearly indicated his readiness to accept all Bulgarian demands. What remains now is that this readiness is put to paper, as Bulgaria will clearly demand a far more binding treaty that the one Zaev signed in 2017.

The madness of this person goes against the dignity of the entire nation. This man goes against the friendship of our two peoples. Zaev lacks spine, he is willing to pay any price he is asked to pay, so long as the bill is sent to someone else, and he protects his own career. In his interview he gave up on our anti-fascist heritage, on the rights of the Macedonian minority and on our heroes. These are all issues which he already promised to Sofia that he will deliver. Zaev is now preparing a major national defeat, and it is up to us whether we will prevent it, Mickoski said.

The opposition leader warned that a country left without its history, left without its roots, will whither and die. He warned Bulgaria that it will achieve nothing using services of “quislings” like Zaev. “If you think that you found a quisling Government in Macedonia, you’re wrong. No Government can erase the deeds of Dame Gruev and Goce Delcev from our collective memory and our hearts. Mickoski called on the Bulgarian Government that, instead of accusing the opposition in Macedonia of spreading “anti-Bulgarian hysteria”, it should to kneel before the monument of the liberators of Skopje and apologize for the actions of Bulgaria during the Second World War”.

In his comments, Mickoski also addressed the European Union countries and the Western countries in general. He said that they must not allow politicians from one member state to pursue a policy rooted in the Middle Ages, that trample the ideals of the founders of the European Union like Adenauer and De Gasperi. “Allow this people to open EU accession talks, and we will reciprocate by tracing the fastest route to full EU membership”.