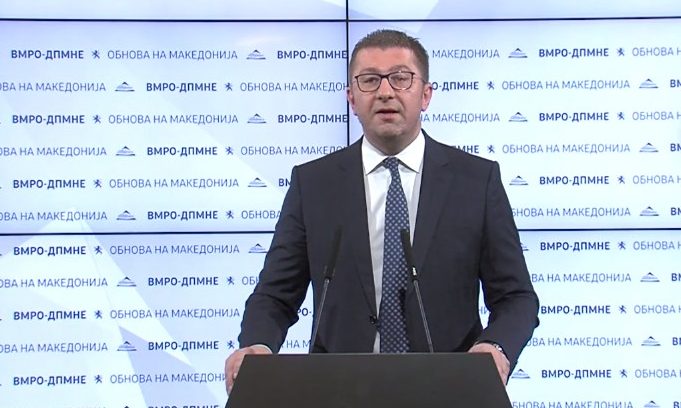 VMRO-DPMNE President Hristijan Mickoski told Zoran Zaev that he will not avoid being held accountable for his criminal actions, regardless of his move to ram a new law on state prosecutors through Parliament which will place Zaev loyalists in key positions in the judiciary and will ban the use of wiretaps as evidence against him.

This Government ends how it began, with violations of the Constitution, of laws and procedures, working overtime to save Zaev and his criminal accomplices through a law that was itself adopted in an illegal, criminal procedure. We also have a good news. Zaev is finished. His humiliating rule is over. The most shameful episode in modern Macedonian history is closed, Mickoski said, pointing to the second vote – to finally dissolve the Parliament and begin the preparations for early elections on April 12.

Mickoski said that he has pledged before his fellow party members and other citizens who were unjustly persecuted over the past three years that VMRO will bring down the Zaev Government. Mickoski added that the voters will now have a chance to have their say on what comes next for Macedonia.

You know full well what you were through over the past three years under Zaev and you can rectify a historic mistake. We had three years of brutal crime and injustice, under the most criminal Government in Europe. Years of racketeering and extortion amounting to millions of euros, of crooked and decaying judiciary where prosecutors were carrying Louis Vuitton bags. Was anybody held accountable for the crimes perpetrated over the past three years? The criminals are in coalition with the Government and Zaev protects their businesses. Zaev let Igor Spasov flee and lied to the parents of the children killed in the Monster case while letting their murderers walk free, Mickoski said.

The PPO law had to be proposed after the spectacular meltdown of the Macedonian judiciary under Zaev, when his top loyalist, Special Prosecutor Katica Janeva, was caught extorting millions from businessmen she was prosecuting. Janeva was the main tool of the Zaev regime in its persecution of VMRO-DPMNE officials and activists, which brought Zaev to power in 2017. After her arrest, Janeva came to an agreement with SDSM under which she gave the cases she was working on, which are used to pressure the opposition, to the equally loyal Public Prosecutor Ljubomir Joveski, presumably in exchange for leniency in the charges against her. SDSM declared this deal, which Janeva signed from prison, as valid and insisted that it completely removes the need to adopt a new law that would officially roll up Janeva’s office, but it later became apparent that the European Union will not accept this patch-up. It remains to be seen to what extent will today’s scandalous vote in the Parliament help or hurt Macedonia’s EU prospects.

During the press conference Mickoski went on to list all the other failed promises Zaev made, besides his promises to improve the rule of law, leading up to his failure to secure the opening of EU accession talks despite the imposed name change.

He promised salaries of 500 EUR, 500 kilometers in new highways, clean Alpine air, a new student campus and a new clinic.. I can’t list all his failed promises, but by now you all know him and you know that his word is worth nothing. Let’s defeat him together, Mickoski said.

The opposition leader expressed his shock that Zaev will hold a “march for justice” on Monday, inviting his supporters to a rally to celebrate the law on state prosecutors.