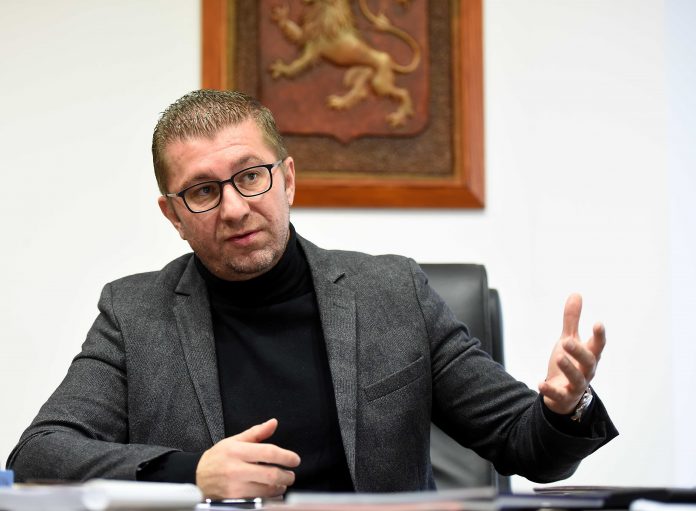 In an interview with Vecer, VMRO-DPMNE President Hristijan Mickoski says that the opposition has additional evidence of racketeering that implicates the ruling SDSM party – evidence that will be made available to the public if the prosecutors continue to drag their feet and to protect SDSM officials. Asked about the Prespa treaty, Mickoski repeated the party’s position that it will be rescinded if a big enough majority is achieved in Parliament, and if not, that he will encourage the use of the name Macedonia and Macedonians and will push for speedy EU membership which will allow a renewed push to overturn the name change.

There are dozens of people who were targeted for extortion by Government officials, and by officials who manage state institutions. Evidence of this was given to us and we encourage the businessmen to also go to the state prosecutor’s office. We will wait for the prosecutors to act on this evidence. Some of these businessmen are afraid, they know that if they speak out, there won’t be an inspection in the country that won’t come knocking on their door. Organized crime prosecutor Vilma Ruskoska said that she will speak with me about this evidence in July, now it’s November, and she hasn’t invited me to meet. How are we to believe that the prosecutors are fighting crime if she is not telling the truth in a TV interview, Mickoski told Vecer.

Mickoski was deliberately vague about whether the evidence is still kept in the VMRO-DPMNE office. One of the reasons the opposition party did not push as strongly on the corruption front was the need to have Macedonia open its EU accession talks, but this failed as EU member states turned a critical eye toward the high levels of corruption.

We worked constructively in Parliament, despite all the criticism coming from our party ranks that we are too passive, as we wanted to give a chance to the entire process, and wait for October and the hoped for date to open EU accession talks. But the facts of the case were so bad that we didn’t receive the date. The signs were clear, the Government was told there will be zero tolerance for corruption, crime, political blackmail and abuses of the Constitution. The Racket scandal is the biggest corruption scandal in our country and it is clear that the people who are now charged could not have carried it out by themselves We have direct interference of top Government officials in Racket, in Racket 2, there is Racket 3, there is no telling how many sequels will this case have, Mickoski said, announcing that Prime Minister Zaev will be held accountable for his corruption after his electoral defeat on April 12th.

According to Mickoski, the facts were so bad that it is not just France which blocked the opening of EU accession talks. The opposition leader insists that the EU makes its decisions unanimously and in this case it no decision could be reached because of negative developments in Macedonia, such as Zaev’s push to amend the drugs law in a way which will benefit his family’s marijuana business while the talks in Brussels were on-going.

As Zaev is playing his final remaining card – fear-mongering in Brussels and Washington that an electoral defeat for him will mean the end of the Prespa treaty – Mickoski again outlined his position on the forced renaming of Macedonia.

VMRO-DPMNE was not part of this shameful process which included pressuring the members of Parliament. We do not support the Prespa treaty, and we find it damaging to our national interests of the Macedonian people. There are two options – to take a step back with a two thirds majority in Parliament. The other would require a lot of work, a lot of reforms, to put Macedonia on the fast track toward the European Union, and from the inside we can try change it. What is important that neither this treaty, not any other treaty can stop Macedonians from declaring themselves as Macedonians, who speak the Macedonian language and come from Macedonia, Mickoski said.

He emphasized that under him, the country will turn away from the politics of both underlining the ancient history of Macedonia, disparagingly called “antiquisation” by the left, but also from the policies of imposing the name North Macedonia – or “nordenisation”. Mickoski says that VMRO-DPMNE will push for a return toward the Macedonian national identity, Macedonisation, which can bind the country together. He insists that the systematic humiliation of Macedonians must end because along with the poor economic results, that is a major factor that is driving the young to lose faith in their country and to move out.

The statistics are disastrous. Eight out of ten university graduates say they want to leave Macedonia, and five out of then actually do so. It is nothing new that the villages are emptying out, now the cities are emptied as well, with full buses leaving daily for the European countries. That is what happens when you build up expectations in order to seize power, and once in office, you let everybody down, Mickoski says referring to one of the key promises made by Zoran Zaev – that he will bring the migrant youth back to Macedonia.