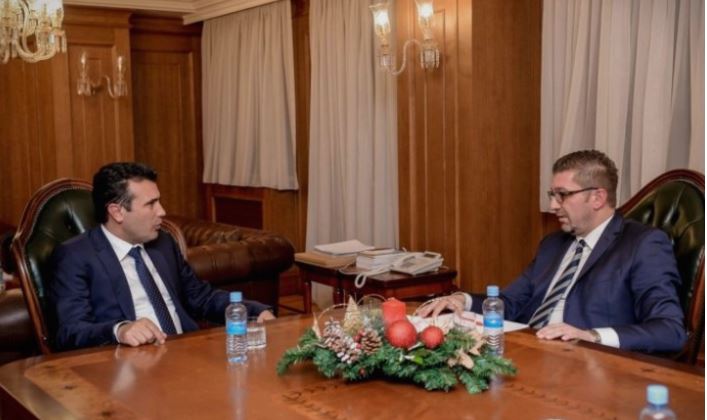 Zoran Zaev has no authority to call for the unification of the ethnic Macedonian political bloc, said VMRO-DPMNE President Hristijan Mickoski, when asked about Zaev’s proposal made yesterday. Zaev is involved in difficult talks with the ethnic Albanian DUI party, which is determined to exact maximum concessions from him. DUI is also trying to solidify the Albanian bloc around it, inviting other ethnic Albanian party leaders to a gathering on Thursday dedicated to the 2001 Ohrid peace treaty. In response, Zaev said that he might convene the Macedonian parties.

He asked Zaev what happened with his claims to have the biggest support among ethnic Albanians, now that it’s clear that all other parties that vied for the Albanian vote won more votes than his SDSM party.

Mickoski said that there is still possibility to create a political Government, but that it is clear that VMRO’s proposal to hold elections in autumn was best. Some 200.000 voters abstained due to fears from the coronavirus, and the chaotic elections ended with an evenly split Parliament.

Seeing them now kneel in front of DUI, the same party they called worthless just weeks ago, when they bragged they will send DUI to the opposition, reminds us of our proposal for elections in autumn. If they had listened to us, we could’ve saved lives that were lost and protected people from being infected, Mickoski said, predicting that this current political impasse could well end with another round of early elections in autumn.