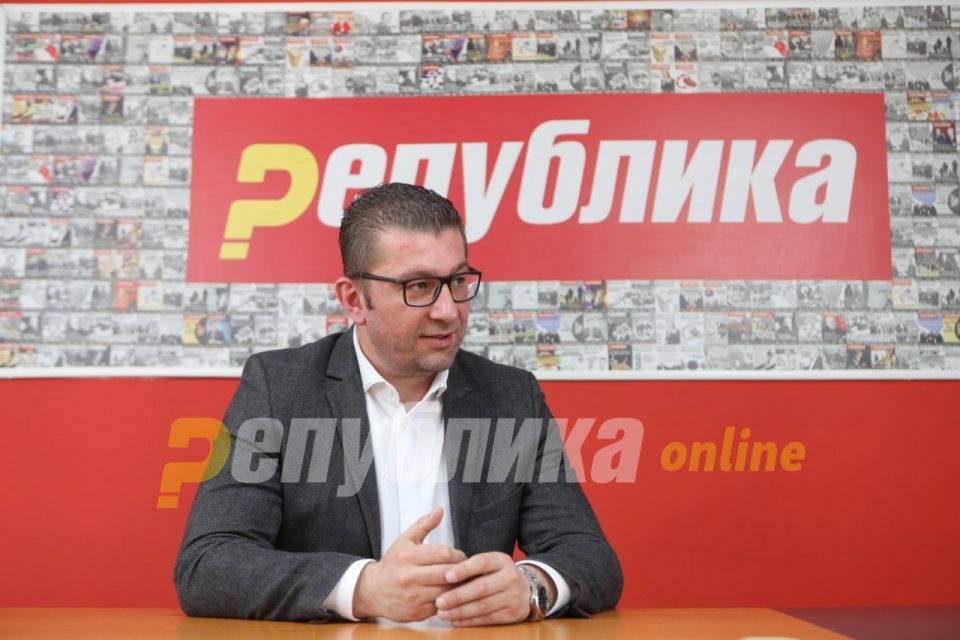 VMRO-DPMNE President Hristijan Mickoski said that after the scandals involving Special Prosecutor Katica Jnaeva, it is clear that Zoran Zaev is at the top of the criminal enterprise. Mickoski warned against attempts to designate a few fall guys in the major scandal which revealed that the most lauded institution in Macedonia’s judiciary was used for racketeering. The scandal erupted after showman and 1TV television owner Bojan Jovanovski – Boki 13 was arrested for extorting money from businessmen who had legal trouble with Katica Janeva, in exchange for getting Janeva to go easy on them.

We are witnessing a panic attempt by the Government to whitewash all participants in this crime, and to get two or three people to shoulder the entire blame. This is a lost cause for them. The defendant would have no power on his own to deliver what he was promising if there weren’t for his close ties to the now utterly compromised Special Prosecutor’s Office, but also with the leadership of the Government. We can’t forget how close this man was to people from the Government, or how close the Government was to his media outlet. The people who are charged are not at the head of the criminal octopus, they are mere executors. There is serious suspicion that the head is Zoran Zaev himself, and that the tentacles are the leading people from his party. Katica Janeva was the most faithful enforcer of Zoran Zaev and he was invited in the TV station of the defendant when he declared how Janeva and her SPO office were the “spark of hope” in the judiciary. We now saw that they were part of Zaev’s criminal, violent, unjust intentions with the judiciary, Mickoski said in an interview with the Expres news site.

The opposition leader reminds the public of the numerous criminal and corruption allegations about Zaev himself, which were not investigated by the judiciary, and were at times swept under the rug precisely by SPO and Janeva.

There is no person alive in Macedonia who doesn’t understand the link between the compromised Special Prosecutor’s Office and the criminals in the Government. We know that a Minister in the Government of Zoran Zaev, whose days are numbered, is threatening media outlets not to report on the scandal. We heard how Zaev needs all of five seconds to agree to discuss offering a bribe to Patriarch Bartholomew. Did you seriously think that an extortion attempt worth 5 million EUR would not be routed through the hands of this Government?, Mickoski asked, discussing Janeva’s alleged attempt to extort millions from businessman Jordan Kamcev in exchange for her dropping the money laundering case against Kamcev.

Mickoski asked that the investigation reveals the two top SDSM party officilas who were allegedly involved in the racketeering attempt, and whose names, although widely known in the public, are still not being freely published by the press to avoid litigation. Mickoski said that these two officials are causing trouble for Zaev because they know too much about him and if they face an investigation, it could turn uncomfortable for the Prime Minister.

According to Mickoski, Zaev’s way of running the country which is now fully on display is the reason why Macedonia can’t hope to get a date to open EU accession talks, and it will also damage other important processes, such as the 2020 census. Mickoski refused Zaev’s offer of a leadership meeting, unless the main topic of discussion is holding early genearl elections, which Mickoski says are badly needed.

Zoran Zaev is the chief threat to the European perspective of the country and I honestly don’t see the need to be an ornament in his leadership meetings, at a time when he is still not prepared to discuss early elections, the opposition leader said.