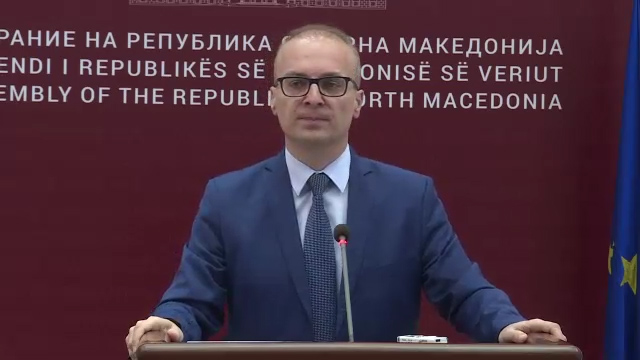 VMRO-DPMNE member of Parliament Antonio Milososki announced that he will meet with organized crime prosecutor Vilma Ruskoska this morning, and give her a wiretap that reveals involvement of former Prime Minister Zoran Zaev in the major racketeering scandal. It’s likely the same tape that Milososki revealed in the Parliament recently, in which you can hear Zaev’s voice discussing the business of Bojan Jovanovski – Boki 13, one of the key people in the racketeering scandal.

Upon my request, I’m meeting organized crime prosecutor Vilma ruskoska. The goal is to give her an audio material given to me by a whistleblower, where you can recognize the voice of Zoran Zaev. I will also provide her with a transcript, which raises suspicions that Zoran Zaev was up to speed with the illegal funding of the International Association, which Bojan Jovanovski used to extort money from businessmen. It reveals that Zaev, as Prime Minister, was personally involved in helping fund

Jovanovski’s 1TV television. I hope that the prosecutor will find his material helpful in her on-going case on this matter, Milososki said.

Ruskoska is prosecuting Boki 13 and Parliament Deputy Speaker Frosina Remenski for using a bogus charity named the International Association to extort at least a million EUR from two companies they targeted. In the recording, Zaev is heard discussing Boki 13’s business, his source of funding, confirming that he knows the money come from one of the businessmen who faced extortion. Zaev also says that he helped Boki’s television several times.

Ruskoska has been careful to keep the investigation far from Zoran Zaev so far, despite allegations from the opposition that there is no way Boki 13 or even Katica Janeva would be able to extort money without political support from the highest levels of the Government.