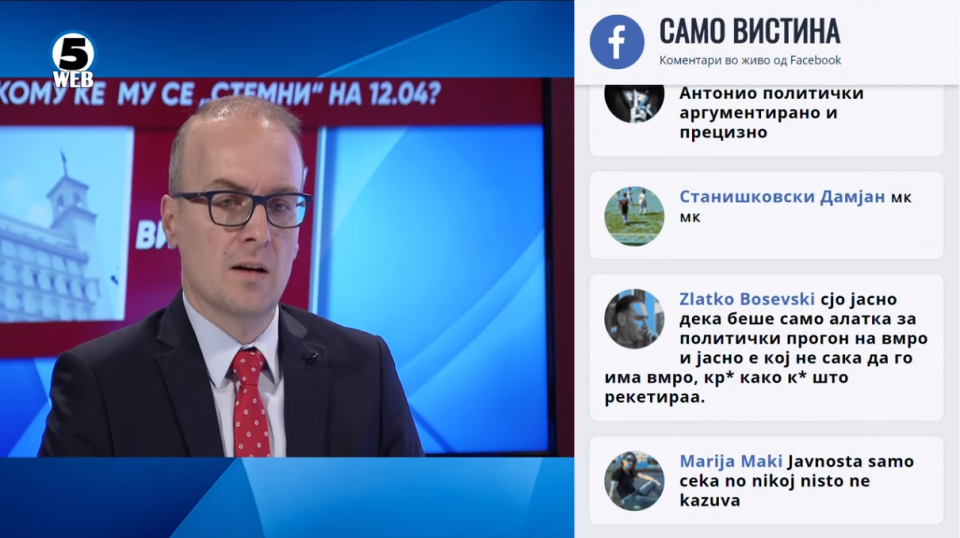 The expiration of the SPO cases is not accidental, MP Antonio Milososki said Thursday on the “Samo vistina” show. Speaking about the Law on the Public Prosecutor’s Office and the fate of the SPO cases, Milososki gave an insight into the expiration of the statute of limitations of the “Trajectory”case and, soon probably that of the “Violence in Centar”.

I think there is a secret agreement in the background between certain influential actors in the country including the head of government himself, but also those who were previously influential in that position. I think there is a secret agreement not to reach the full truth in certain cases. How else to understand the testimony of Verusevski, who was and still is Zaev’s first collaborator and had the wiretapped materials at his disposal, when he said at one of the last hearings that much of that material had been compromised, Milososki said.

He explained his thesis with the escape of former Prime Minister Gruevski.

The public has been waiting for a year to see the Interior Ministry and the prosecution’s report on how the former prime minister flee the country. I think there should be some responsibility, but I don’t see it, Milososki said.

The former foreign minister gave a concrete answer about how, according to him, the organization of Gruevski’s escape was running, that is, what kind of a secret agreement preceded the escape.

I think there is a secret agreement between Prime Minister Zaev and the closest associates of former Prime Minister Gruevski, Milososki said, explaining that based on the events we have witnessed so far and are yet to happen, the public will judge for itself who has benefited from this agreement.

He recalled the claims of VMRO-DPMNE Vice-President Aleksandar Nikoloski, who claimed a year ago that Prime Minister Zaev’s brother Vice is in very good cooperation and communication with the former Prime Minister’s cousin.