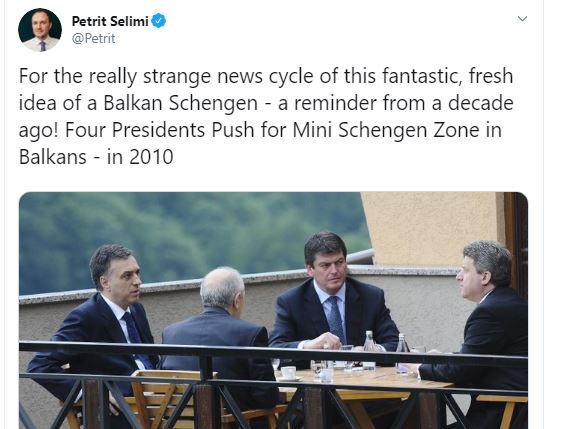 Enthusiasm expressed by Zaev backers aside, the Mini Schengen idea is an old one, promoted under the same name at least a decade ago, and is largely implemented by now. Zoran Zaev convened a regional meeting in Ohrid this weekend, after the failure to secure approval for opening the EU accession talks, and triumphantly presented the Mini Schengen initiative along with the leaders of Albania and Serbia, which he said will bring great benefits to the region. It was presented as a project that includes shorter waiting times at the border crossings for passengers and goods, recognition of university degrees and easier labour market access between the Balkan countries.

But the Balkans already has a pretty high level of integration in these matters and what was lacking was access to the European integration process and especially EU structural funds. Still, Zaev supporters rushed to the social media to praise the initiative.

One person who poured cold water on the Mini Schengen groupies was former Kosovan Foreign Minister Petrit Selimi. Kosovo did not participate at the Ohrid meeting and Selimi pointed out that the initiative will bring little additional value.

Don’t want to pour rain on parade but this is quite a silly news cycle. Kosovo already has bilateral agreements with all our neighbors to cross borders with ID cards only. A “Schengen agreement” would be if citizens in Balkans would cross borders without being stopped at all, Selimi wrote in response to an OSCE official in Serbia praising the summit in Ohrid.

Don’t want to pour rain on parade but this is quite a silly news cycle. #Kosovo already has bilateral agreements with all our neighbors to cross borders with ID cards only. A “Schengen agreement” would be if citizens in Balkans would cross borders without being stopped at all. https://t.co/sSuuQ3nsew

“Kosovo has bilateral agreements with 3/4 neighbors on mutual recognition of diplomas. Problem in Balkans is that most of diplomas are incompatible with Western standards. Far more fundamental issues are hampering regional cooperation”, Selimi added to reinforce the point that the Balkan countries have largely completed the task of mutual integration and what they need now is EU integration.

Selimi also tweeted out an article announcing the creation of the Mini Schengen project – in 2010. Then Presidents Gjorge Ivanov of Macedonia and Filip Vujanovic of Montenegro initiated a series of regional summits which included Bamir Topi of Albania and Fatmir Sejdiu of Kosovo. The point of the meetings was the same – greater ease of movement of good and people, integration of the economy, lowering barriers to access the labour market. In the article, the initiative was again named Mini Schengen, and work on it has continued throughout the years.

And while the benefits of the latest incarnation of Mini Schengen are doubtful, what it did create is competition between Albania and Serbia over who will dominate this new form of regional integration. Both Aleksandar Vucic and Edi Rama faced questions at home over whether they are allowing the other side to be the big player in the little Schengen. Vucic even addressed the criticism that he is allowing more room for Albanian nationalism by promoting this type of integration. Meanwhile, Macedonia enters the initiative as the smallest nation, with recently destabilized national identity and national interests, in a clearly subordinate position after Zaev was clearly unable to even publicly request decoupling from Albania that could’ve secured the opening of EU accession talks. The predicament Macedonia finds itself in was made even more clear by the Economist interview with French President Emmanuel Macron, who warned that decoupling Macedonia from Albania could’ve caused an adverse Albanian reaction in the region. And yet, instead of receiving the equal standing as full EU member states, which Zaev promised to the public when he embarked on the name change adventure, all that Macedonia stands to gain at this moment is further integration with Albania and Serbia.